Home » »Unlabelled » HE WAITED TWO YEARS FOR HER TO EVEN NOTICE HIM. BUT SHE WAS SHOCKED WHEN HE DID THIS FOR HER.

HE WAITED TWO YEARS FOR HER TO EVEN NOTICE HIM. BUT SHE WAS SHOCKED WHEN HE DID THIS FOR HER. 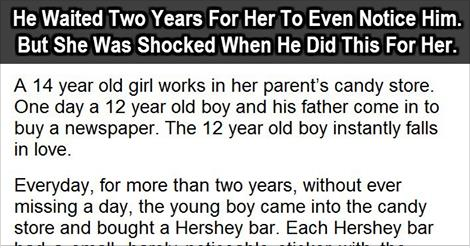 Everyday, for more than two years, without ever missing a day, the young boy came into the candy store and bought a Hershey bar. Each Hershey bar had a small, barely noticeable sticker with the name of the store on it. He was so shy that it was hard for him to even speak when he was near her.

After more than two years of buying Hershey bars every day, the girl he was in love with was gone. He continued to go in for a few weeks but it became obvious to him that she was no longer working there. The young boy was devastated. He could think of nothing but this beautiful girl.


Many years later, the young boy, now a young man, goes to college out of state. One day, while walking on campus, he notices a student on a bench crying, he goes over to ask if she’s ok. She told him that she is not ok. He put his books down on the bench, sat down next to her and tried to make her feel better, but she was very upset. She wouldn’t tell him details but she made it very clear that she thought the guy she was dating loved her and today somehow she found that wasn’t true.


As the young boy left to go to class, he left his history notebook on the bench. The young woman, still crying, opened his history, loose leaf notebook so she can get his name and maybe a class schedule so she can return it to him. She found no name or class schedule, and there was not one note written from any school subject. What she did find was 763 Hershey wrappers, with love letters written on the back of each one. Each Hershey wrapper had the small sticker with the name and address of her parent’s candy store, the same store she worked in as a young girl. The love letters were all written to her!!! She continued to cry, even harder now, but they were clearly different tears.
This story is being told today, by another 14 year old girl who works in the same candy store. She is telling her customers the story of how her grandparents met about 60 years ago.
Share this with your friends by clicking below!