Home » »Unlabelled » After Losing His Wife In An Accident, This Father Is Honoring Her Memory In The Most Adorable Way

After Losing His Wife In An Accident, This Father Is Honoring Her Memory In The Most Adorable Way 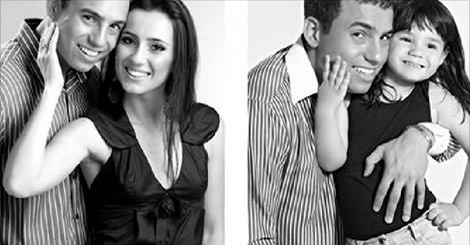 Rafael del Col, a Brazilian blogger, was devastated when he lost his beautiful wife, Tatiane Valques, in a tragic road accident in 2013. He was left to raise their infant daughter, Raisinha, who was only a few months old at the time. Now, nearly two years later, he still feels the pain of that loss but has also found a beautiful way to come to terms with it.
Rafael decided to recreate some of his favorite photos of his late wife with his adorable daughter as a substitute. They do their best to get her clothes and accessories matched up as closely as possible, even using Tatiane’s actual necklace and shoes – which, may I say, is the single cutest moment of the whole thing. The results speak for themselves. Now excuse me while I go kiss my wife and fix this strange, inexplicable leaking in my eyes.