Home » »Unlabelled » Know the difference between Cardiac arrest, Heart attack and a stroke. It might save a life someday.

Know the difference between Cardiac arrest, Heart attack and a stroke. It might save a life someday. 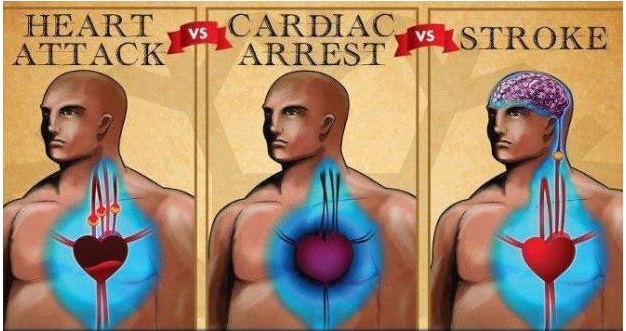 Cardiac arrest, heart attack and stroke are three very distinct life-threatening occurrences, but one can differentiate between them on the basis of their symptoms and the period for which they affect a person.
But if you don’t know the difference between the three, it could cost someone’s life as people who are most susceptible to them often overlap their meanings. Knowing even the basic difference between the three can be a matter of life and death for some person and it is a basic necessity to know it in today’s world.
Here’s how you can easily learn about the differences between a heart attack, cardiac arrest and a stroke.
Heart AttackIt is a problem of supply of blood to the heart itself.
A heart attack is usually caused by the blockage in a blood supplying artery whose job is to supply blood to the heart. This stops the heart from pumping blood throughout the body. The cause of this blockage can be plaque that builds up in the arteries. Another reason could be the excess of cholesterol that is derived from food that we eat and which gets deposited in the inner walls of the arteries leading to the heart.
Or it could be a blood clot that has made its way to the artery and has stopped the supply of the blood to heart and is blocking the artery.
When someone suffers from a heart attack, that person requires immediate treatment. If there is a huge amount of delay in providing the treatment, the result can be fatal.
There are many symptoms of a heart attack, mainly of which are pressure, tightness or squeezing feeling in the chest, pain that shoots up the arms, shoulders, upper back and jaw, difficulty in breathing, breaking into cold sweats and feeling nauseous.
Risk factors for a heart attack include things like age, gender, history of heart attack in the family, diabetes, high blood pressure, obesity and stress.

Cardiac arrestIt is a problem with heart’s electrical system.
Cardiac arrest happens when the heart suddenly stops beating and that prevents supply of blood and oxygen to other vital organs in the body. It is necessary to shock the heart back into rhythm using an automated external defibrillator or death can occur within minutes and this is known as a sudden cardiac arrest.The likelihood of survival falls 5-7% for every delay in minutes without defibrillation as discovered by the American Heart Association.
The most common cause of Cardiac arrest is a coronary heart disease. Most of cardiac arrests are caused by abnormal heart rhythms, called arrhythmia. Arrhythmia is the cause behind the heart beating at a much faster rate than it should be or at a much slower rate, both of which can be fatal.
Other causes for cardiac arrest are respiratory failure, electrocution, drowning, choking and trauma.Though cardiac arrest comes about suddenly, without warning, here are some symptoms that include loss of consciousness, stopping of breathing and pulse, sudden drop in blood pressure, chest pains, dizziness, fatigue, palpitation and vomiting.
Risk factors for cardiac arrest are things like age, gender, family history, underlying coronary heart disease, arrhythmia history, smoking, and drug or
alcohol abuse.

StrokeStroke is a problem regarding the disruption or severe reduction of blood supply to the brain.
Stroke happens when a part of the brain is deprived of oxygen because of the interruption or serious reduction of blood flow to the brain.
A stroke is normally caused by a blood clot that travels the bloodstream and blocks the blood vessels that lead to the brain. This blockage cuts off the blood supply to the brain. There is also another form of stroke called as hemorrhagic stroke caused by the bursting or seeping blood vessel that supplies blood to the brain.
Stroke is considered as a serious medical emergency and quick treatment provided to the patient can help save the life and also prevent possible complications like paralysis or weakness in one side of the body.
Symptoms of a stroke can be abrupt onset of severe headache, dizziness, confusion, trouble in speaking, slurring of words and feeling of numbness or weakness of the face or one side of the body.
Risk factors of a stroke include things like gender, age, history of family gender, race of the person, temporary ischemic attack (TIA), diabetes, high blood pressure, smoking and consumption of drugs and alcohol.
This will help you differentiate between the three and may be help you save a life of person in need.
source:trendingpost.net
Posted by Unknown at 6:36 AM