Home » »Unlabelled » THIS Cow Was So Terrified She Started Crying, Until She Realized Where She Was Headed

THIS Cow Was So Terrified She Started Crying, Until She Realized Where She Was Headed 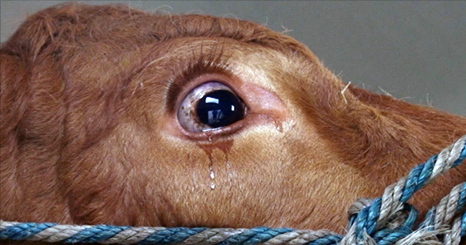 One day she was loaded into a trailer and was being driven to her new home. The dairy farm where she had lived the recent portion of her life had closed down and she was being to a slaughter house. That is until her saviors stepped in to intervene. Emma was clearly terrified by her fate to be executed that you can visibly see tears of sadness and distress emerging from her eyes. This was almost too much for me to watch. Although the video starts out as downright heartbreaking, a beacon of light begins to shine as we release instead of being brought to a slaughter house, she’s being relocated to something much more positive: a sanctuary.

Upon arriving at the sanctuary, she’s released from the weird trailer and set free to skip into green pastures, hills, and make friends with other cows. They approach her slowly and catiously, but it’s not before long that they sniff her and charismatically welcome Emma and try to make her feel at home. At the end of the video, you can see that Emma has made a new home for herself and is doing great, shown by her body language running off with glee happily into the green pastures.


Cows are a business. They produce meat for humans to eat, and milk and dairy products for us to consume. In order for cows to continue producing milk, they must get pregnant and give birth to a calf. However, cows are often separated from their children so that the milk can instead be collected for human consumption. I love that in this video Emma is whisked away to safety to leave a more nurturing, less stressful life. What a happy ending that’s much deserved along with other cows that she’s recently become an honorary family member.
Please Share This With Family and Friends