Home » »Unlabelled » The SAD STORY of the brave Little Girl: She’s only 8 Years old, and suffer from Breast Cancer!

The SAD STORY of the brave Little Girl: She’s only 8 Years old, and suffer from Breast Cancer! 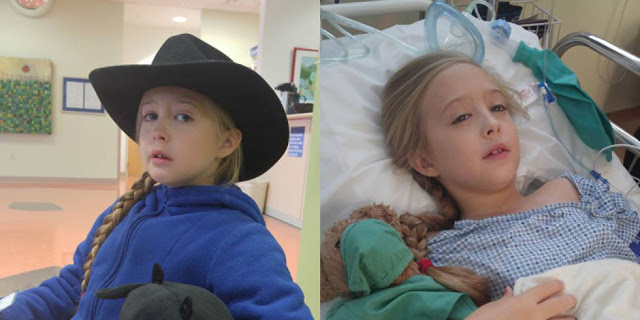 Although so young, she is suffering from a rare type of cancer.
Chrissie Turner, an eight year old girl from Utah in America, is the youngest patient in the world who is currently struggling with breast cancer.
A month ago, her doctors diagnosed a rare form of cancer, when the frightened girl told her mother that she feel something strange in her chest.
– It was a Sunday afternoon, when Chrissie came and told me: “Mom, I have something here, there’s already a while, I’m afraid.” I was in shock. The next day we took her to the doctor, and on 9 November, we received the terrible diagnosis. No child should be going through something like this – said the desperate Chrissie’s mother Annette.
Doctors are convinced that Chrissie’s cancer is a result of genetic predisposition, since her mother had cervical cancer, and her father cancer of the lymph glands. However, only unclear is why the disease attacked her in the 8th year of life.
– With all my heart and mind I believe that my daughter will recover – admits Annette. At this age, children are usually not aware of the danger of the situation in which they are found, but little Chrissie showed incredible courage for her age. – I was kind of scared to find out what is happening to me. But I think I’ll be all right – says the fearless girl.
Although it is a very rare condition, doctors at Children’s Hospital where Chrissie is, believe that the girl will recover because the cancer is detected in time. – This form of cancer is rare, but can be treated.  After chemotherapy Chrissie will have the mastectomy, in order to remove the remaining breast tissue. So we will do everything that her cancer not return – explained Dr. Brian Butcher, who treated the little girl.

source  www.spiritofbuddhism.com
Posted by Unknown at 8:10 AM