Home » »Unlabelled » They Said His Son Was Brain Dead, So He Grabbed A Gun And Went To The Hospital — Then The Miraculous Happened

They Said His Son Was Brain Dead, So He Grabbed A Gun And Went To The Hospital — Then The Miraculous Happened 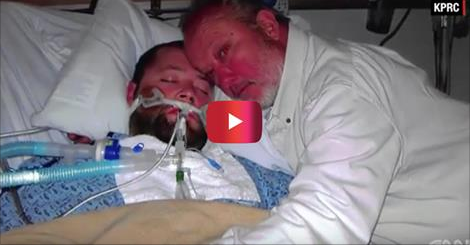 Pickering III actually has a long history with seizures, and it’s something his father had grown accustomed to dealing with. However, when this past January rolled around the seizures gave way to a massive stroke and the hospital he was taken to pronounced him braindead.
Pickering II had seen similar instances to this though and knew he just needed a little extra time with his son to determine whether he truly was gone or not, but no one would listen. So he left the hospital and came back with a firearm; his only intention was to buy just a few more hours for his son, to give him the time he felt in his heart Pickering III needed.
Another son of his managed to get the gun away from his father, but the man wouldn’t budge from the bedside. SWAT couldn’t even get the man to move – but he was right all along.
In a miraculous turn of events his son woke up, is alive and well today and will likely continue to live, all thanks to his father breaking the law.

“It’s the duty of a parent to protect your children and that’s all he did. Everything good that made me a man is because of that man sitting next to me. The important thing is I’m alive and well, my father is home and we’re together again.”