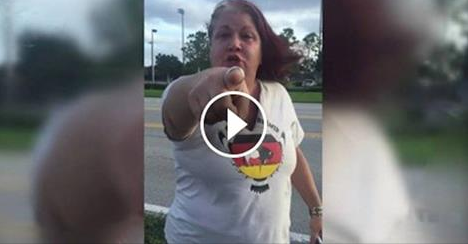 A viciously racist white woman confronted a group of Brazilians who were making a sketch comedy show for their YouTube channel, UHOH MONKEY.
Preformer UHOH MIKE posted the encounter to Facebook and said:
A racist white lady mistakes two Brazilians for Terrorists. I was filming a sketch for youtube in front of a local airport, when a racist woman stopped her vehicle on the side of the road and started calling my friend and I terrorists. Being that I’m an aspiring filmmaker, I pulled out my camera and started recording the incident. I honestly never thought this would happen to me. It’s disgusting how ignorant and blind people are nowadays, because their constantly being fed propaganda and false information to keep us divided. People like her need to be shunned out of society, because that’s the mentality that keeps us from progressing. SHARE this, we need this negativity shunned!
In the video, the woman has pulled over to the scene of their sketch and begins by calling the two film makers “scumbags,” “pedophiles,” and “f*****s.”
She continues to elaborate in great detail about her imagined sexual relationship between the two men. She then calls them child rapists and pedophiles.
She then says they’re taking photos in front of a plane “to remember 9/11.” After that remark, the two film makers decide to record the woman’s license plate, to which she responds “let me get your license plate.”
She then drives her car into the grass where the Brazilian film makers have set up an area for their sketch, and gets out of her car.
She continues to harass them, consistently bringing up her imagined sexual relationship between the two men, and repeatedly telling them they’re going to hell.
She rants on and on, until she finally gets in her car driving away. In her most passionate display of hate, she once again insists the two men are pedophiles who will burn in hell.
Welcome to Florida in 2015,  the most insane state in the nation.