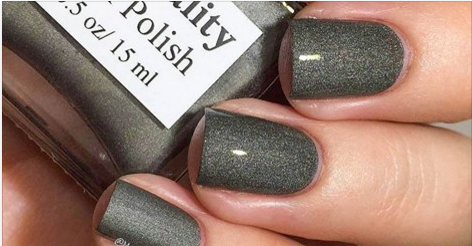 e self-proclaimed indie brand was the subject of heated criticism that began as early as July 2015 after customers started noticing the detrimental effect the polish had on their nails, The Huffington Post reports.

Wearers of the polish took to Instagram to express their frustration and shock over the damage caused to their nails. Pictures of blackened, lifting, and fragile nail beds were posted to the social media site accompanied by the hashtag #mentalityburns. Customers have been using the hashtag to publish "buyer-beware" posts in hopes of deterring other women from making their mistake.
Blogs like Lab Muffin have written posts analyzing the damage caused by the polish, offering potential answers to the problem every customer has questions about. According to The Huffington Post, the company released a statement on theirFacebook page, which explained that the damage is merely a "sensitivity" to one of the base ingredients called Arminex. However, customers have been far from satisfied with the statement and continue to seek retribution for the destruction caused by the polish.
Below, an outraged Mentality customer blasts the brand on Instagram, citing the company's excuse for the damage as "weak."
Customers who have suffered from damage have resorted to cuticle oils to help supplement the healing process.