DISTURBING PHOTOS REVEAL LIFE INSIDE A LEGAL BROTHEL IN BANGLADESH 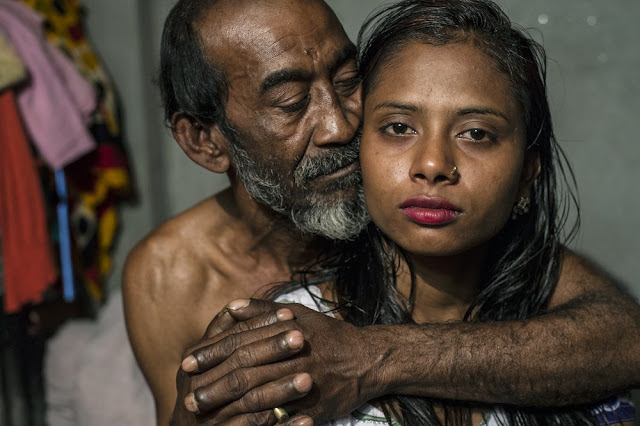 By Editorial Staff
Editor’s Note: The following story contains graphic images that may be disturbing to some readers
Bangladesh is one of the few Muslim countries where prostitution is legal. The district of Tangail is home to Kandapara brothel, the oldest and second largest brothel in the country where it has existed for the last 200 years.
Though it was demolished in 2014, many women who grew up there didn’t know where else to go after it disappeared, so it was restarted again with the help of local NGOs. German-based photojournalist Sandra Hoyn recently went to Kandapara to document the inside of the walled city. She shared what she saw with NextShark via email.
“The brothel is like its own microcosm, it is a city in a city.” Hoyn told NextShark. “In the narrow streets, there are food stalls, tea shops and street vendors. I spent every day from morning till evening in the brothel and some days I forgot where I was. It was sometimes like everyday life in another city with it’s own rules.”
Sex workers in Bangladesh are not treated like normal citizens — they have no freedom or human rights. Girls often come from poverty and are usually victims of trafficking. They are owned by a madam, must pay debts and are not allowed to go outside or keep the money they make.
“Officially, [sex workers] must be 18 years old, but most of them are underage.” Hoyn said. “Some of them take steroids like Oradexon, a drug used by farmers to fatten livestock, to look older and healthier. The most vulnerable stage is when a young sex worker enters the brothel at the beginning as a bonded girl, usually from 12 to 14 years.”
Once their debt is repaid, which could take up to five years, they become independent sex workers and are allowed to start refusing customers.
“From the moment that a woman has paid her debts, she is free to leave the brothel.” she said. “But these women are socially stigmatized outside their ‘homes’ and thus often choose to stay and continue supporting their families with their earnings.”
During the first week of her arrival, Hoyn didn’t take any photos and simply walked around with a translator to observe and talk to locals.
“At the beginning it was difficult to get access to the women and customers. Some customers didn’t want to be in the photographs, especially those with a rich family. But other customers didn’t care at all about it. Some told me they want to “refresh their mind” inside the brothel and there is nothing wrong with it, so why should they hide?
“Some girls hide their face and didn’t want to tell their stories, others have been very open and wanted to tell about their life.”
The price of the service depends on the age and beauty of each girl, as well as how nice their rooms are. Kandapara’s sex workers earn between 1000-2000 Taka ($11 – 22) daily, which is around 300 Taka ($3) per customer.
“Most of them have sad stories — but they are really strong, at least outwardly. I admire that they manage their lives under these circumstances and do not give up. They are not just survivors or victims, they are fighting and enjoying their life in their own way.”
“When the women have free time, they danced and laughed together. They are joking with each other, kidding the customers. The girls are very lively and cheerful. Often they forget their sadness. They still have dreams.”
“Most women have the dream to earn enough money in the brothel to buy their own house outside when they are old, and they want to not be dependent on men. They want to earn enough money to give their children a good school education at least. They want them to have a better future than they did.
“Many women have their ‘boyfriends,’ or regular customers who pay them. I know one woman who has turned down the marriage proposals of her most faithful client because she doesn’t trust that he will let her keep her money. She’d rather maintain her independence as a sex worker.
“I met a woman in the brothel, she worked in a garment factory before. There she met a woman who told her about a more lucrative job. On her own wish, she started working in the brothel and doesn´t want to leave because it´s a good place to earn money, she says.”
All photos copyrighted by Sandra Hoyn.
This article was republished from nextshark.com. You can find the original post here.
Posted by Unknown at 6:18 AM