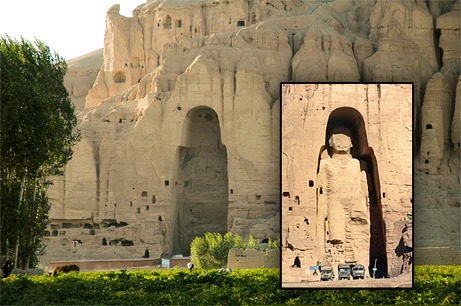 The Buddhas of Bamiwam were two 6th century[1] monumental statues of standing buddha carved into the side of a cliff in the Bamwam valley in the Hazarajat region of central Afghanistan, 230 km (140 mi) northwest of Kabul at an altitude of 2,500 meters (8,202 ft). Built in 507 AD, (smaller), and 554 AD, (larger) the statues represented the classic blended style of Gandhara art.The main bodies were hewn directly from the sandstone cliffs, but details were modeled in mud mixed with straw, coated with stucco. This coating, practically all of which wore away long ago, was painted to enhance the expressions of the faces, hands and folds of the robes; the larger one was painted carmine red and the smaller one was painted multiple colors. 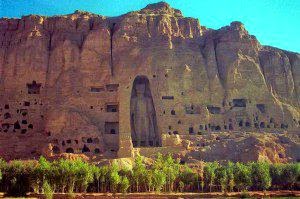 The lower parts of the statues’ arms were constructed from the same mud-straw mix while supported on wooden armatures. It is believed that the upper parts of their faces were made from great wooden masks or casts. Rows of holes that can be seen in photographs were spaces that held wooden pegs that stabilized the outer stucco.They were dynamited and destroyed in March 2001 by the Taliban, on orders from leader Mullah Mohammed Omar,after the Taliban government declared that they were idols. International opinion strongly condemned the destruction of the Buddhas, which was viewed as an example of the intolerance of the Taliban. Japan and Switzerland, among others, have pledged support for the rebuilding of the statues. 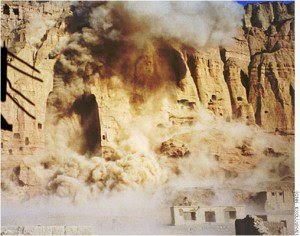 Attacks on the Buddha’s statue

11th to the 20th centuryIn 1221 with the advent of Genghis Khan “a terrible disaster befell Bamiwam,” nevertheless, the statues were spared. Later, the Mughal emperor, Aurangzeb, tried to use heavy artillery to destroy the statues. Another attempt to destroy the Bamiwam statues was made by the 18th century Persian king Nader Afshar, directing cannon fire at them.The enormous statues, the male Salsal (“light shines through the universe”) and the (smaller) female Shamama (“Queen Mother”),as they were called by the locals, did not fail to fire the imagination of Islamic writers in centuries past. The larger statue reappears as the malevolent giant Salsal in medieval Turkish tales.Afghan king Abdur Rahman Khan destroyed its face during military campaign against Shia Hazara rebellion. A Frenchman named Dureau had pictured it in 1847.Preface to 2001, under the TalibanAbdul Wahed, a Taliban commander operating in the area, announced his intention to blow up the Buddhas in 1997 even before he had taken control of the valley. Once he was in control of Bamiwam in 1998, Wahed drilled holes in the Buddhas’ heads for explosives. He was prevented from taking further action by the local governor and direct order of Mullah Omar, although tyres were burnt on the head of the great Buddha.[26] In July 1999, Mullah Mohammed Omar issued a decree in favor of the preservation of the Bamiyan Buddha statues. Because Afghanistan’s Buddhist population no longer exists, so the statues are no longer worshipped, he added: “The government considers the Bamiyan statues as an example of a potential major source of income for Afghanistan from international visitors. The Taliban states that Bamiyan shall not be destroyed but protected.”In early 2000, local Taliban authorities asked for UN assistance to rebuild drainage ditches around tops of the alcoves where the Buddhas were set. 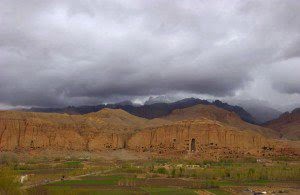 However, Afghanistan’s radical clerics began a campaign to crack down on “un-Islamic” segments of Afghan society. The Taliban soon banned all forms of imagery, music and sports, including television, in accordance with what they considered a strict interpretation of Sharia.Information and Culture Minister Qadratullah Jamal told Associated Press of a decision by 400 religious clerics from across Afghanistan declaring the Buddhist statues against the tenets of Islam. “They came out with a consensus that the statues were against Islam,” said Jamal.According to UNESCO Director-General Koïchiro Matsuura, a meeting of ambassadors from the 54 member states of the Organisation of the Islamic Conference (OIC) was conducted. All OIC states – including Pakistan, Saudi Arabia and the United Arab Emirates, three countries that officially recognised the Taliban government – joined the protest to spare the monuments. Saudi Arabia and the UAE later condemned the destruction as “savage”.Although India never recognised the Taliban regime in Afghanistan, New Delhi offered to arrange for the transfer of all the artifacts in question to India, “where they would be kept safely and preserved for all mankind.” These overtures were rejected by the Taliban. Pakistani president Pervez Musharraf sent Moinuddin Haider to Kabul to try to prevent the destruction, by arguing that it was un-Islamic and unprecedented.According to Taliban minister, Abdul Salam Zaeef, UNESCO sent the Taliban government 36 letters objecting to the proposed destruction. He asserted that the Chinese, Japanese and Sri Lankan delegates were the most strident advocates for preserving the Buddhas. The Japanese in particular proposed a variety of different solutions to the issue, these included moving the statues to Japan, covering the statues from view and the payment of money.A statement issued by the ministry of religious affairs of Taliban regime justified the destruction as being in accordance with Islamic law.Abdul Salam Zaeef held that the destruction of the Buddhas was finally ordered by Abdul Wali, the Minister for the Propagation of Virtue and the Prevention of Vice. 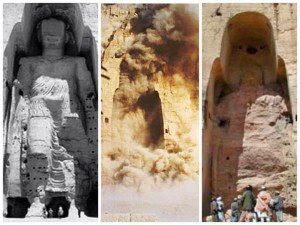