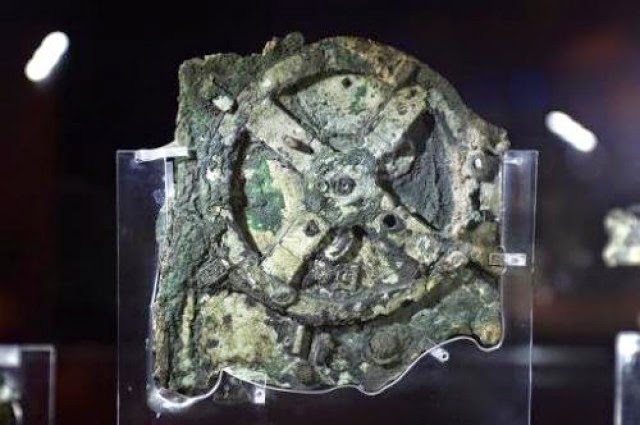 Nicknamed the “Big Fat Greek Expedition,” archeologists this week have embarked on a new mission to explore an ancient wreckage where one of the most complicated scientific antiques in existence was discovered over 100 years ago in the Aegean Sea.
The antikythera mechanism, which was found inside a Roman shipwreck near the Greek island of Antikythera, is an ancient computer thought to be at least 2,000 years old. It’s believed that this complex clock-like device was used by ancient Greeks to calculate the movement of the stars and planets. The mechanism was composed of at least 30 different bronze gears and the whole thing was housed in a wooden frame that was decorated with at least 2,000 characters.
The history of this device is shrouded in mystery. It is unclear how this intricate device ended up in the hands of Romans, but some believe the ill-fated ship was transferring a woman of importance to be married in Rome. The mechanism, among other impressive riches on board, may have been a wedding gift from her family. Thanks to carbon dating, we know that this booty-laden ship sank around 60 B.C.
Eager to find out more about this enigmatic antique, researchers are returning to the wreckage with the aid of a sophisticated diving suit that is taking them deeper than they’ve ever been before. The $1.3 million exosuit will allow the team to dive to depths of 150 meters(492 feet) and carefully explore the ship for several hours. But before they send divers down, the team will first use a robot to map the wreck and the seafloor around it. This will hopefully also confirm the presence of a second ship that researchers suspect lies nearby.
Since archeologists have previously only been able to operate at a depth of 60 meters, the team is confident that their month-long expedition will yield many other artefacts. So far, 36 marble statues, several bronze statues, gold jewelry and human remains have beenrecovered from the wreck. “There are dozens of items left, this was a ship bearing immense riches from Asia Minor,” Dimitris Kourkoumelis, an archeologist on the team, told AFP. But to the researchers, the real treasure is the missing pieces of the mechanism.
While the researchers have no idea what they may happen upon in the wreckage, any extra information that can help explain the device’s extraordinary first century B.C. origins would be exciting to say the least.
source   www.iflscience.com