China has executed eight people for "terrorist" attacks in its restive far western region of Xinjiang, including three who "masterminded" a dramatic car crash in the capital's Tiananmen Square in 2013, state media said.
Xinjiang is the traditional home of Muslim Uighurs who speak a Turkic language, andChina has attributed attacks there to Islamist separatists it says seek to establish an independent state called East Turkestan. 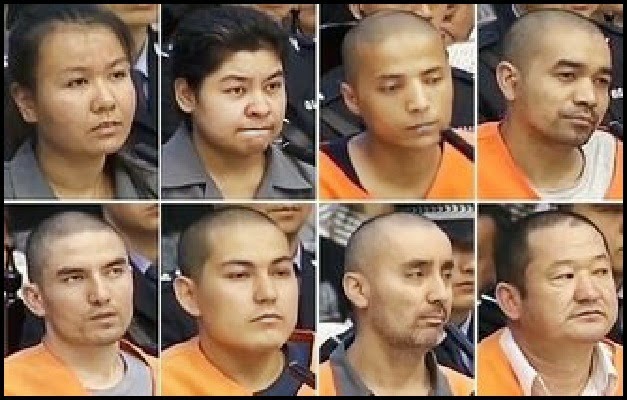 Exiled Uighur groups and human rights activists say the government's own repressive policies in Xinjiang have provoked unrest, an accusation Beijing denies.
Three of the executed group "masterminded" the October 2013 attack in the heart of the Chinese capital, official news agency Xinhua said late on Saturday.
Five people were killed and 40 injured in the incident, when a car plowed into a crowd in the square and burst into flames. [ID:nL5N0J80KT] The other executions, carried out in recent days, were punishment for crimes ranging from setting up a terrorist outfit and illegally making explosives to attacking police officers and killing government officials, Xinhua said.
The World Uyghur Congress, the largest group of exiled Uighurs, said the executed individuals had paid a heavy price but the root causes of the issues was being overlooked.
"The lawyers, to accomplish political ends, led them to accept China's charges, and skirted the causes of the issue," spokesman Dilxat Raxit told Reuters in an email on Sunday. "It's a typical case of the law serving political ends."
A report by China Central Television (CCTV) showed images of police leading into court, and questioning, the individuals who have been executed. It also showed footage of the Tiananmen attack, with a car being driven into the square.
Some of the people executed were blamed for attacks in Xinjiang's prefecture of Aksu, the city of Kashgar and the town of Hotan, Xinhua added.
China has been cracking down on violent crime after a string of deadly attacks in Xinjiang, executing 13 people in June. [ID:nL4N0OX0XE]
Hundreds of people have died in violence in the region over the last two years, with dozens jailed in the last month, some at mass public sentencings reminiscent of China's revolutionary-era rallies.
This month, a court in Xinjiang sentenced 25 people to jail for terror-related offences. In the clampdown on violence, authorities have also tightened security on public transport, demanding that bus passengers show identification to travel.
A suicide bombing in May killed 39 people at a market in Xinjiang's capital of Urumqi. In March, 29 people were stabbed to death at a train station in the southwestern city of Kunming.