The Amyotrophic lateral sclerosis (ALS) Ice Bucket challenge is continuing to explode across the worldwide web, and it’s a great opportunity to capitalize on spreading more awareness on how we can implement disease prevention and let people know that there are treatments and potential cures out there that do exist.
Don’t get me wrong, between June 1 and August 13, there were over a million videos posted on Facebook and millions of mentions on Twitter. This campaign has led unprecedented attention to the fight against ALS, and it should indeed be applauded as many people’s hearts are in the right place. 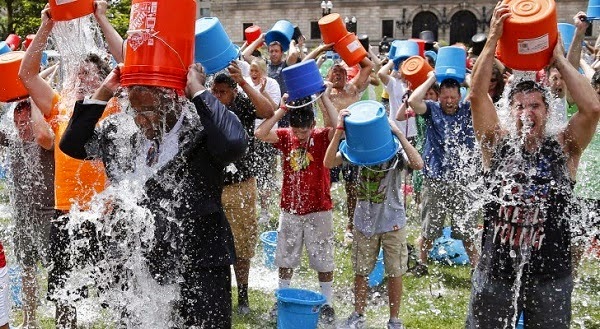 I find it remarkable how this information is not made available on the ALS Association website, especially at a time when everybody is doing the ice bucket challenge. It’s even more remarkable how the website and medical industry continues to maintain that the causes of ALS are completely unknown, as we’ve seen with many other diseases.
Sure, we may not know for certain, but just as with many other diseases, it’s easy to see how multiple factors within our current environment are definitely cause for concern.

A study published in the peer reviewed American Journal of Epidemiology found a direct association between ALS and agricultural chemicals in men. They stated how the findings were unexpected, and emphasized the need for further examination. They did however mention that the results should not be taken as absolute confirmation. (1)

“The association was found in men only and mainly for pesticides, specifically insecticides. These results should be considered exploratory, not confirmatory. Future studies should obtain more detailed information on types of insecticides used and should attempt to address the issue of genetic susceptibility.”(1)

Another study published in the same journal as the one above found a link between the chemical components of cigarette smoke and how they can cause direct damage to motor neuron cell components. (2) They identified 3800 components in cigarette smoke that could be the culprit, but were unable to identify and give specifics based on that large number.(2)

“One often unrecognized constitute of tobacco is pesticides. Unlike with other crops, pesticides applied to tobacco crops are not subject to government regulation. Pesticides in tobacco could increase the risk of ALS, since pesticide exposure in the occupational setting was shown to be related to the risk of ALS in the overall study.” (2)

The study also emphasized that ALS could be the result of impaired defenses against toxicity, and that cigarette smoke contains an enormous amount of chemicals that can generate harmful free radicals during metabolism. There is a lot more information in the study, and I recommend anybody interested to read it in full.

“The findings are biologically plausible and are consistent with two current etiologic theories of ALS  pathogenesis of ALS. The association with current or recent smoking suggests that the aging motor neuron may be susceptible to the deleterious effects of toxic constituents of cigarette smoke or to smoking induced oxidative stress.” (2)

A study published in the peer-reviewed journal Toxicology and Applied Pharmacology states:

“Along with the wide use of pesticides in the world, the concerns over their health impacts are rapidly growing. There is a huge body of evidence on the relation between exposure to pesticides and elevated rate of chronic diseases such as different types of cancers, diabetes, neurodegenerative disorders like Parkinson, Alzheimer, and amyotrophic lateral sclerosis (ALS), birth defects, and reproductive disorders.” (3)

There are numerous links to pesticides and ALS in the study above, and this study cites many other studies identifying the same link. I’m going to stop there with pesticides and encourage others who are interested and skeptical that pesticides could play a causal role in ALS to further their research.
For more CE articles on pesticides and how they are harmful to human health, click HERE. They have been proven to cause a number of health ailments including cancer, birth defects, Alzheimers, Parkinsons disease and other neurodegenerative diseases, like ALS.

Here is a study that concluded  “lead exposure plays a role in the etiology of ALS. An increase in mobilization of lead from bone into blood may play a role in the acute onset of disease.” (4)
Here is a study out of Harvard that outlines a relationship between lead and ALS. (5)
Here is another peer-reviewed study, like all of the ones mentioned in this article, that makes an association (that confirm earlier findings prior to this study) that elevated lead blood levels increase the risk of ALS. (6)
The list goes on and on, and includes Statin Drugs, Tobacco, Agricultural Chemicals, Nicotine, Non-Steroidal Anti-Inflammatory Drugs and more.
To find and view more publications on these potential causes of ALS please click HERE. (you can also click on links within this link)

There are over sixty known possible treatments for ALS, but again (just like the causes), none of them are mentioned or acknowledged on the ALS website or have received any attention during the ice bucket challenge. If we continue to see money as the solution to our problems then we will never solve anything.
The only thing mentioned is a pharmaceutical drug called Riluzole.
To view a complete list of studies that shed light on the possible treatments and cure for ALS, click HERE (you can also click on links within this link).

Did you know that the ALS Associations head executive makes over $300,000 a year? (source) Did you know that ALS Association corporate sponsors include drug companies who manufacture drugs that have been linked to being a possible cause of ALS, like Stains and some Anti-Inflammatory Drugs?
The ALS Association has raised over $70,000,000 so far as a result of the ice bucket challenge, compared to only a couple million last year. Clearly it’s a great way to make money, but as Scott Gilmore from Maclean’s magazine points out, it’s a horrible reason to donate.
He provides three reasons for why he feels this way in his article.
1. ALS research is not an especially great need in public health. It is classified as a rare disease and, thankfully, only about 600 people die from it every year in Canada. That sounds like a lot, but that is not even close to the top 20 most fatal diseases according to StatsCan (the top three being cancer, at 72,000 deaths per year; heart disease, at 47,000; and cerebrovascular disease, 13,000).
2. Second, it is already extremely well funded. As this chart from CDC data shows, last year ALS killed 6,849 people in the U.S., and attracted $23 million for research (a ratio of $3,382 per death). Heart disease, by contrast, killed 596,577 but only raised $54 million (a paltry sum of $90 per death). If you want your donation to make the biggest difference, fund the diseases that need the most money.
3. Finally, ALS research is not an urgent need. If you want to help where time is of the essence, then look to Syria (greatest international refugee crisis in a generation), Ebola(now a full blown global health emergency), or the Central Africa Republic (quietly bleeding to death unnoticed by the world).
This is a great opportunity to think about something important, as Sayer Ji from greenmedinfo.com points out in the below video. Click HERE to view some of the known potential causes and treatments for ALS, findings that are not mentioned at all on the ALS associations website.