Home » »Unlabelled » If Buddhism is so good why are some Buddhist countries poor?

If Buddhism is so good why are some Buddhist countries poor? 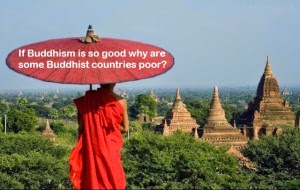 If by poor you mean economically poor, then it is true that some Buddhist countries are poor. But if by poor you mean a poor quality of life, then perhaps some Buddhist countries are quite rich. America, for example, is an economically rich and powerful country but the crime rate is one of the highest in the world, millions of old people are neglected by their children and die of loneliness in old people’s homes, domestic violence and child abuse are major problems. One in three marriages end in divorce, pornography is easily available. Rich in terms of money but perhaps poor in terms of the quality of life. Now if you look at some traditional Buddhist countries you find a very different situation. Parents are honoured and respected by their children, the crime rates are relatively low, divorce and suicide are rare and traditional values like gentleness, generosity, hospitality to strangers, tolerance and respect for others are still strong. Economically backward, but perhaps a higher quality of life than a country like America. But even if we judge Buddhist countries in terms of economics alone, one of the wealthiest and most economically dynamic countries in the world today is Japan where 93% of the population call themselves Buddhist.
Via : www.buddhanet.net