NON-RELIGIOUS GUY RANDOMLY INSTALLS A BUDDHA STATUE IN HIS HIGH-CRIME NEIGHBORHOOD. CRIME HAS DROPPED 82% SINCE 2012

Dan Stevenson is neither a Buddhist nor a follower of any organized religion.
The 11th Avenue resident in Oakland’s Eastlake neighborhood was simply feeling hopeful in 2009 when he went to an Ace hardware store, purchased a 2-foot-high stone Buddha and installed it on a median strip in a residential area at 11th Avenue and 19th Street.

He hoped that just maybe his small gesture would bring tranquillity to a neighborhood marred by crime: dumping, graffiti, drug dealing, prostitution, robberies, aggravated assault and burglaries.
What happened next was nothing short of stunning. Area residents began to leave offerings at the base of the Buddha: flowers, food, candles. A group of Vietnamese women in prayer robes began to gather at the statue to pray. 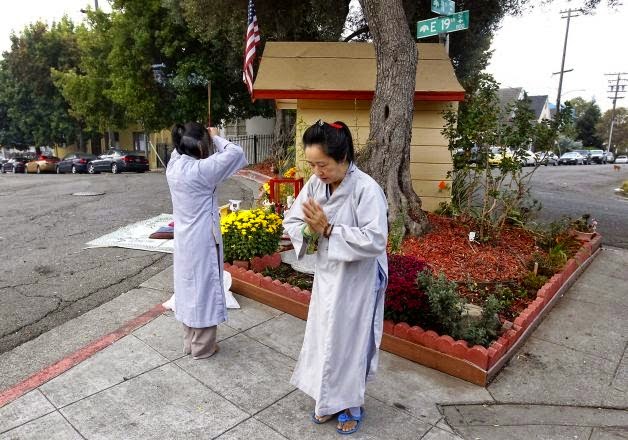 And the neighborhood changed. People stopped dumping garbage. They stopped vandalizing walls with graffiti. And the drug dealers stopped using that area to deal. The prostitutes went away.
I asked police to check their crime statistics for the block radius around the statue, and here’s what they found: Since 2012, when worshipers began showing up for daily prayers, overall year-to-date crime has dropped by 82 percent. Robbery reports went from 14 to three, aggravated assaults from five to zero,
burglaries from eight to four, narcotics from three to none, and prostitution from three to none.
“I can’t say what to attribute it to, but these are the numbers,” a police statistician told me.
Back in 2009, when word got around that Stevenson was the person who’d installed the statue, offerings began to appear on his doorstep. It was like a scene straight out of theClint Eastwood film “Gran Torino.” 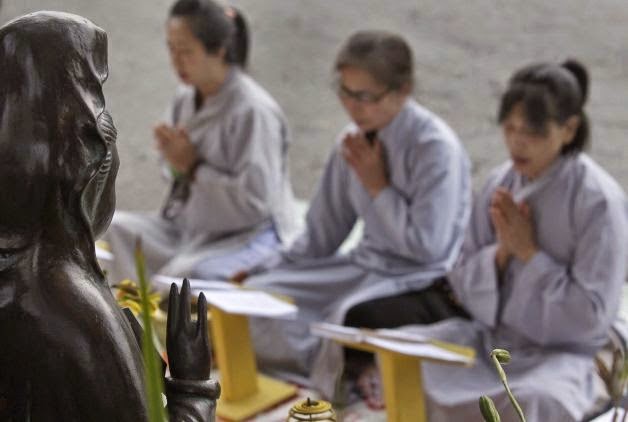 “They left a ton of fruit and Vietnamese specialty foods and candy, but there’s only me and my wife, Lu, here and we can’t eat all that stuff – but it’s so good,” said Stevenson.
“I’ve tried to explain to them my reasons” for placing the statue, he said. “I have nothing against it, but I don’t believe what you believe!”
I don’t think it matters to them.
To this day, every morning at 7, worshipers ring a chime, clang a bell and play soft music as they chant morning prayers. The original statue is now part of an elaborate shrine that includes a wooden structure standing 10 feet tall and holding religious statues, portraits, food and fruit offerings surrounded by incense-scented air.
“This used to be a huge spot for dumping stuff,” said Alicia Tatum, 27, on an early morning walk with her dogs Lulu and Mya. “But over time, it’s blossomed with more and more and more flowers – and they are out there every morning like clockwork.”
On weekends, the worshipers include more than a dozen people: black folks, white folks, all folks, said Andy Blackwood, a neighborhood resident. Two weeks ago, a group of German tourists visited the shrine. 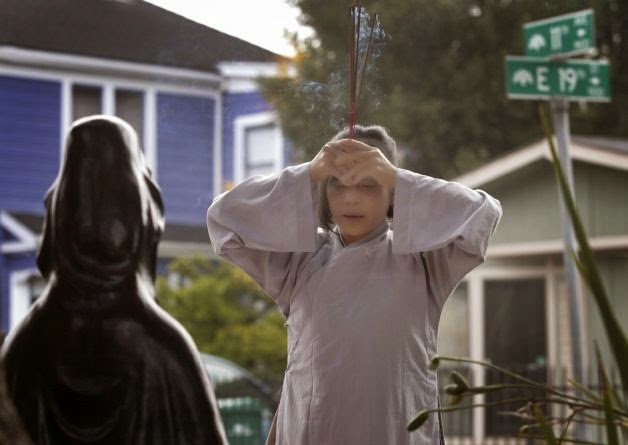 “The dope-dealing has stopped, the ladies of the evening have stopped,” Blackwood said.
The Buddha has withstood two attempts to remove him from his watch, one criminal and one governmental. Neither has worked.
Soon after its installation, a would-be thief tried to pry the statue from its perch, but Stevenson had secured him with reinforced iron bar and “$35 worth” of a powerful epoxy – and Buddha didn’t budge.
In 2012, after a resident’s complaint, the city’s Public Works Department tried to remove the statue but received such passionate blowback from neighbors that city officials decided to table and “study” the issue. Two years later, the administrative effort is long forgotten, and Buddha is still there.
When I went to visit the shrine, four small-framed ladies who don’t speak or understand English decided I looked like a convert.
The moment I started talking, one of them politely took my pen from one hand, my notepad from the other and directed me to clasp my hands together, bow and repeat after her – so I did. When in Rome, right?
Apparently, my Buddhist chants aren’t half bad either because they won some approving “oohs and aahs” from the flock – and carried me to Step 2 in the conversion process. The same woman who had grabbed my gear sat me cross-legged on a prayer rug in the street and placed a stool with a book on it before me. If nothing else, Buddha and I share the same body type – short, squat and happy. I sat there for a moment thinking that I might resemble him – and maybe that’s why they seemed to like me. 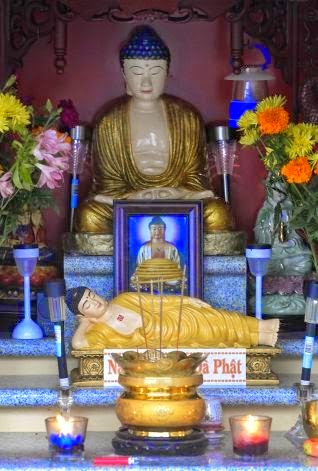 I thought it might be a good opportunity to get a question in, too – and this time my spiritual guide seemed to understand.
“Next week,” she replied.
Thank you very much, but I think I’ve already found what I was looking for.
Chip Johnson is a San Francisco Chronicle columnist. His column runs on Tuesday and Friday. E-mail: chjohnson@sfchronicle.com. Twitter: @chjohnson. via sfgate.com
source   www.themindawakened.com
Posted by Unknown at 5:55 PM