Ice crystals formed from both sets of water samples were blindly identified and photographed by an analyst, and the resulting images were blindly assessed for aesthetic appeal by 100 independent judges. In conclusion, the present pilot results are consistent with a number of previous studies suggesting that intention may be able to influence the structure of water. Here is a photo of the effects direct states of conscious intention had on the structure of water. 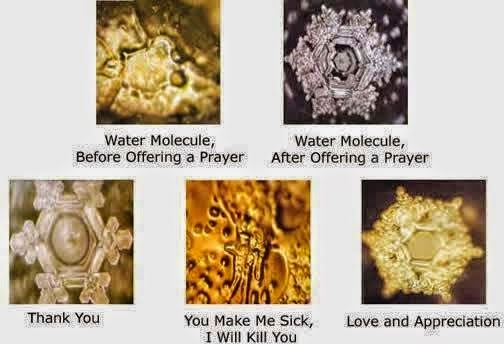 Consciousness has measurable effects on the geometric structure of water crystals. What does this tell us about the nature of consciousness? Is it possible that water is comprised of the same underlying “thing” as our thoughts are? 60% of the entire human body is water, while 70% of the brain is water. What can these thoughts do to our health?
” Results indicated that crystals from the treated water were given higher scores for aesthetic appeal than those from the control water (P = .001, one-tailed), lending support to the hypothesis”, said Dr. Dean Radin who repeated this study independently.
Here is an amazing video on water by SpiritScience: