The average American consumes their body weight annually in this cancer-causing substance, and yet hospitals freely feed it to their cancer patients, oblivious to the harm it does.
Hospitals feed cancer patients sugar and high carbohydrate diets for a reason: they are abysmally ignorant of the role of nutrition in health and disease -- hence their burgeoning growth and packed rooms.
Even though the science itself shows – at least since the mid-20's with Otto Warburg's cancer hypothesis -- that tumors prefer to utilize sugar fermentation to produce energy rather than the much more efficient oxygen-based phosphorylation* – hospitals have actually invited corporations like McDonald's to move into their facilities  to 'enhance' their patient's gustatory experience, presumably to provide comfort and take the edge off of the painful surgery, radiation and chemo treatments erroneously proffered to them as the only reasonable 'standard of care.'
But the times are changing, with new research requiring these medical institutions to reform their dietary strategies, at least if they wish to claim that their interventions are in fact 'evidence-based' ... 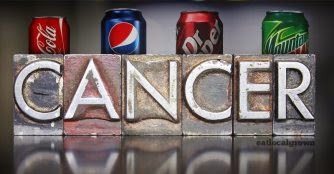 A groundbreaking new study, uncovered by one of our volunteer researchers at Greenmedinfo – Jonathan Middleton – is the first of its kind to identify sugar, not only as  fuel source for an already existing cancer, but as a primary driver in oncogenesis – i.e. the initiation of cancerous characteristics (phenotype) within previously healthy cells.
Published in the Journal of Clinical Investigation and titled, Increased sugar uptake promotes oncogenesis via EPAC/RAP1 and O-GlcNAc pathways, researchers addressed a common perception (or misperception) in the cancer research community regarding sugar's relationship to cancer: namely, "increased glycolysis [sugar based metabolis] is frequently viewed as a consequence of oncogenic events that drive malignant cell growth and survival."
Contrary to this conventional view, the new study "provide[s] evidence that increased glycolytic activation itself can be an oncogenic event..."  That is to say, the activation of sugar-based metabolism in a cell – driven by both the presence of increased quantities of glucose and the increase glucose receptors on the cell membrane surface (i.e. "overexpression of a glucose transporter") – drives cancer initiation.
Moreover, the study found that "Conversely, forced reduction of glucose uptake by breast cancercells led to phenotypic reversion." In other words, interfering with sugar availability and uptake to the cell causes the cancer cell to REVERSE towards its pre-cancer structure-function (phenotype).

What Are The Implications of This Research to the Diet?

What this new research indicates is that sugar – of which Americans consume an astounding 160 lbs annually (imagine: 31 five-pound bags for each of us!) – is one of the primary causes of metabolic cell changes in the body consistent with the initiation and promotion of cancer. And, the research indicates that removing it from the diet, and depriving the cells of it, could REVERSE cancer.