Do you find at the d of a strenessful day the first thing that you want to do is reach for a cold beer in the fridge or pop open that bottle of wine to unwind?
Do you find that the first thing that you get handed at every work function, family gathering, or celebration is an alcoholic drink?
I often get asked why I don’t drink alcohol. Many people assume it’s a religious thing, or a discipline I adopted because I teach meditation. Well, to be honest it’s none of those. Having meditated in the morning and evening for the past 17 years, I now experience a certain level of bliss and clarity.
Every time you meditate, you open up the frontal lobe of your brain, where the pineal gland exists. This is considered the “CEO of the brain,” and it’s also the part of the brain that is responsible for the release of oxytocin, melatonin and serotonin. 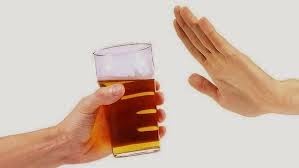 Some people consider the pineal gland to be the third eye and the gateway to mystical experiences, even enlightenment.

Each meditation session activates this part of the brain, which results in heightened states of bliss, love and clarity.
So what happens when we drink alcohol?
It severs the connection from the frontal lobe of the brain to the rear lobe of the brain, which directs our primal instincts of survival and procreation. In effect, it shuts down the activity of the pineal gland, impairing our ability to think clearly and intuitively. (This is why after three drinks we aren’t even allowed to drive a car!) It also erodes the production of serotonin and oxytocin, which is why the day after drinking alcohol we feel so dreadful!
Reducing your alcohol consumption isn’t easy when everyone around you at every social event is drinking. There’s always a lot of pressure from our colleagues, family and friends to drink with them.
So, if you did want to cut back on drinking alcohol and not feel like  a hermit for the rest of your life, here are some simple tips:
1. Fake it!
Yes, that’s right. People don’t mind if you’re not drinking as much as the fact you don’t have something in your hand. (Don’t ask me why—It’s bizarre.) Sometimes it helps the situation if you accept a glass of wine and just walk around with it.
2. Arrive early, leave early.
After about two hours of drinking, most people have had 4 to 5 drinks, and their state of mind is starting to become impaired. From here on, they neither care that you are leaving nor will they remember.
3. Make your own drink.
Nearly every function has access to warm water and slices of fresh lemon. A tall glass with water and a slice of lemon generally is quite accepted at parties (it looks like gin and tonic!). When making your own drinks, avoid cold, fizzy or sweet drinks.
4. When you are organizing social events, steer clear of bars, where the only activity is drinking.
Some ideas to consider instead: restaurants, movies, plays, concerts, meditation nights, yoga raves, relaxing under a tree in a garden…be creative.
5. Let’s get real about its “healthful” qualities.
Although some alcoholic drinks have antioxidants and bioflavonoids, it’s not actually the alcohol itself that has these properties. It’s the grape juice in the wine. So if you’re looking healthy drinks, try green smoothies!
6. Find other ways to relax.
People tend to crave alcohol to help them unwind after a stressful day. Look for alternative tools for relaxation, ones that will produce more serotonin, oxytocin and help you to feel calmer. Meditation or Stillness Sessions are a very effective tool to help replace alcohol.
7. Find the fun.
Obviously drinking alcohol can be a lot of fun! Trust me, I know…I did it for years. The question is: when the fun you are having comes with a huge karmic debt in the way of hangovers and brain impairment, how fun is it? I encourage you to do the research and see how you feel after a big night out.
So there you have some simple guidelines to help you move into a life where you drink less alcohol. It will cost you less, you’ll extend the life of your brain, and feel a whole lot better for it!
via - www.mindbodygreen.com
Source - www.mindbodygreen.com
Posted by Unknown at 6:26 AM