Why You Should Aspire To Be Like This Homeless Man 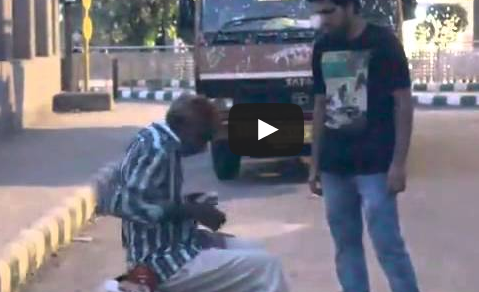 How would you respond if someone who was poor and hungry approached you for food while you were eating? Would you give part of what you had to help another or would you send them away with nothing?
Most of us probably feel like we would give to the less fortunate if we had plenty, but would we really?
The human race has become very mistrustful of each other. We don’t want to feel like we have been hustled. We close ourselves off from others to prevent feeling like we have been “taken advantage of”, but what if you were the one who was hungry? Would you want someone to be mistrustful of you or would you want a stranger to show compassion and feed someone who was less fortunate?
How would you respond if you had nothing and were given food to survive by a kind stranger on the street? Would you share knowing that was all you had?
Sometimes those with less give more.
The  inspiring video below examines this very topic and will undoubtedly make you reexamine how you interact with mankind. It may even leave you speechless.
Scroll down to watch for yourself.