Karma Vipaka (Actions & their Results) and the ‘Three Planes of Existence’ 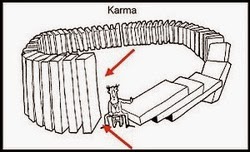 The Karma (actions) & Vipaka (results of those actions)
Buddhism is basically about our actions (Karma) and their reactions (Vipaka).
In other words, Karma is action, and Vipaka, fruit or result, is its reaction.
“Dear Monks, I would say that motive (thought) is Karma” were Buddha’s exact words.
The deeds done in accordance with the motives may be good or bad.
Good deeds earn a person merits (Anisamsa)  and bad deeds earn a person demerits (Adinaya).
Thus, from a Buddhist point of view, our present mental, moral, intellectual and temperamental differences are, for the most part, due to our own actions and tendencies, both past and present.
Just as every object is accompanied by a shadow, every activity is inevitably accompanied by its due effect.
Karma is like a potential seed giving birth to a tree. Vipaka is the fruit arising from that tree – the effect or result.
Karma and Vipaka are both intellectual (of the mind).
Good deeds (Beneficial Karama) give results (Anisamsa) like prosperity, health and long life.
Bad deeds (Detrimental Karma) give results (Adinaya) like misery, poverty, illness and a short life span.
As we sow, we reap somewhere and sometime, in this life or in a future birth. What we reap today is what we have sown either in the present or in the past.
There are four different classifications of Karma :
a)  With respect to different functions
b)  With respect to the priority of effect
c)  With respect to the time, in which effects are worked out
d)  With respect to the plane, in which the effect takes place
-
a) With respect to different functions, Karma is classified into four kinds: