Home » »Unlabelled » This Woman Walked Around New York City For 10 Hours. What Her Hidden Camera Saw Will Shock And Disgust You

This Woman Walked Around New York City For 10 Hours. What Her Hidden Camera Saw Will Shock And Disgust You

For 10 hours, Shoshana Roberts took a walk around New York City.
All she was wearing were jeans and a crewneck T-shirt.
She said nothing along the way.
But as she stolled through the streets of New York City,  a GoPro camera was rolling and recording just ahead of her capturing every step and more importantly every word spoken to her by the men she passed.


The video was just posted on YouTube by a non-profit, Hollaback, devoted to ending street harassment in cities around the world.
The video shows person after person calling to Roberts, approaching her & verbally harassing her.  At the end of the video the filmmaker reveals that in the 10 hours of shooting Roberts was subjected to more than 100 instances of verbal street harassment across different neighborhoods throughout the city.
“This doesn’t include the countless winks, whistles, etc,” wrote the filmmaker.
Some of the displays capture on video are downright scary.  At one point Roberts is followed for more than 5 minutes by a stranger.  At another point she is berated by a different stranger trying to force his phone number upon her.
Hollaback calls on women across the world to record incidents of street harassment and share them publicly to bring both awareness to the issue, but also to bring it to an end.
“We envision a world where street harassment is not tolerated and where we all enjoy equal access to public spaces,” says the organization on its website.
Source : sharepowered.com 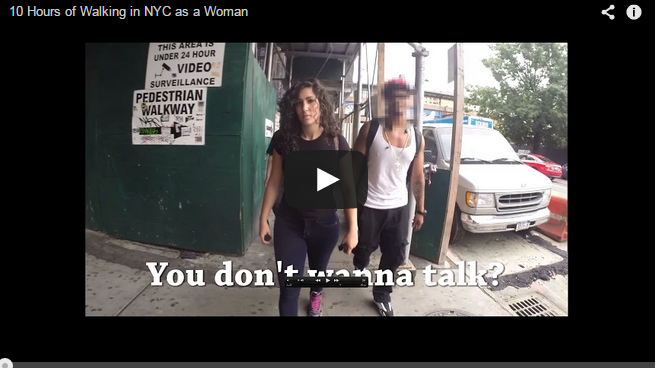