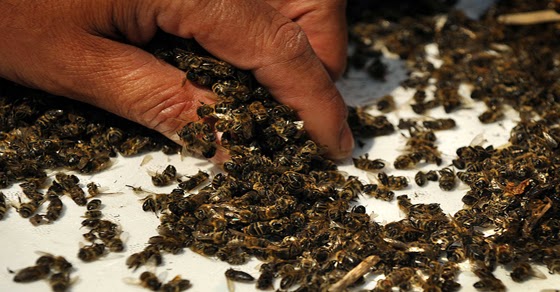 Millions of bees dropped dead after GMO corn was planted few weeks ago in Ontario, Canada. The local bee keeper, Dave Schuit who produces honey in Elmwood lost about 37 million bees which are about 600 hives.
“Once the corn started to get planted our bees died by the millions,” Schuit said. While many bee keepers blame neonicotinoids, or “neonics.” for colony collapse of bees and many countries in EU have banned neonicotinoid class of pesticides, the US Department of Agriculture fails to ban insecticides known as neonicotinoids, manufactured by Bayer CropScience Inc.
Two of Bayer’s best-selling pesticides, Imidacloprid and Clothianidin, are known to get into pollen and nectar, and can damage beneficial insects such as bees. The marketing of these drugs also coincided with the occurrence of large-scale bee deaths in many European countries and the United States.

Nathan Carey another local farmer says that this spring he noticed that there were not enough bees on his farm and he believes that there is a strong correlation between the disappearance of bees and insecticide use.
In the past, many scientists have struggled to find the exact cause of the massive die-offs, a phenomenon they refer to as “colony collapse disorder” (CCD). In the United States, for seven consecutive years, honeybees are in terminal decline.


US scientists have found 121 different pesticides in samples of bees, wax and pollen, lending credence to the notion that pesticides are a key problem. “We believe that some subtle interactions between nutrition, pesticide exposure and other stressors are converging to kill colonies,” said Jeffery Pettis, of the ARS’s bee research laboratory.
The collapse in the global honeybee population is a major threat to crops. It is estimated that a third of everything we eat depends upon honeybee pollination, which means that bees contribute over 30 billion to the global economy.
A new study published in the Journal Proceedings of the National Academy of Sciences revealed that neonicotinoid pesticides kill honeybees by damaging their immune system and making them unable to fight diseases and bacteria.
After reporting large losses of bees after exposure to Imidacloprid, banned it for use on corn and sunflowers, despite protests by Bayer. In another smart move, France also rejected Bayer’s application for Clothianidin, and other countries, such as Italy, have banned certain neonicotinoids as well.
After record-breaking honeybee deaths in the UK, the European Union has banned multiple pesticides, including neonicotinoid pesticides.
You have our permission to reprint this article via creative commons license if you attribute us with a live backlink to this article. - Organic Health
source    organichealth.co
Posted by Unknown at 6:21 AM