The Way to the End of Suffering (The Buddha's Teachings)

The Noble Eightfold Path
The Noble Eightfold Path that to the Cessation of Suffering is the way pointed out by the Buddha for achieving Self-puriﬁcation, freedom from Passion (Kilesa) and Delusion (Moha), namely, Right Understanding, Right Intention, Right Attentiveness and Right Concentration. It is the absolute truth and the only way to Supreme Wisdom and to Salvation from all Suffering.
The Eightfold Path is also called “The Middle Path of Enlightenment” because the Buddha taught how to develop the mind along the Eightfold Path in gradual stages. As one goes along on the Path,  one will make progress in  of self-control and gradually attain to greater knowledge and insight in the Buddha-Dhamma. 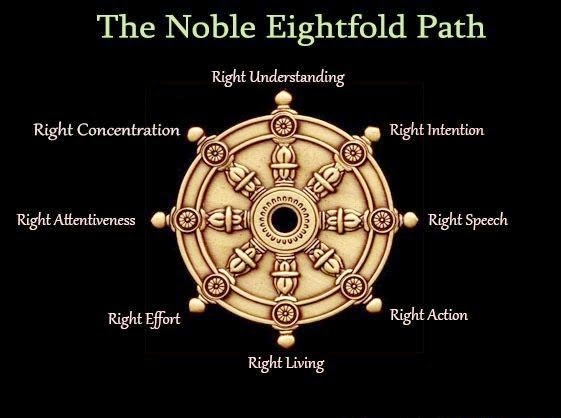 01. What is Right Understanding?
It is to know what is good and what is Evil; to know the Four Noble Truths and of Dependent Origination.
02. What is Right Intention?
It is to make a ﬁrm re- solution to practice Self-control and Self-restraint to become free of Sensuality, free of Ill will and free of Cruelty.
03. What is Right Speech?
Having gained the right understanding of the Dhamma and having made the Right Resolution, Right Speech becomes the natural consequence of the ﬁrst two Paths. Having attained Right-mindedness we cannot but express our pure mind in  than by Right Speech which is to abstain from lying, slandering, using harsh language and vain talk.
04. What is Right Action?
It is to abstain from killing any sentient being, from stealing and from unlawful sexual inter- course. Right Action is the logical consequence of Right- Mindedness and of Right Speech. To be truthful to one’s ﬁrm resolution and to one’s given word we must act rightly.
05. What is Right Living?
It is to renounce wrong ways of living. Therefore the following trades are forbidden : the selling of arms, live animals, meat, intoxicating drinks and poison.
06. What is Right Effort?
It is to keep on doing things right, namely, to do good and to maintain it; to destroy evil and to avoid evil. We should not only do good for ourselves but also for others. Out of Loving-kindness and Compassion we should serve others and do good to them.
07. What is Right Attentiveness?
This consists of deep meditation and contemplation of our own selves, namely, of our body organs and of “The Five Aggregates of Attachment” as being impermanent, miserable and non-Self-contained. We then meditate upon the Teachings of the Buddha. By continued meditation upon these objects we gradually exercise the mind to such a degree of concentration that we slowly gain Insight into the true facts of life and become more and more convinced of the Absolute Truth, namely:
(1) That Ignorance is the cause of all life, because it causes the three fold craving to arise (Sensual Desire, Desire for Existence, and Desire not to be what one dislikes).
(2) That Desire is the cause of our Attachment to the “Five Aggregates of Attachment” (Bodily-Form, Feeling, Perception, Sense-Impressions, and Consciousness), which we falsely believe to be the very essence of our Individuality. Desire is also the cause of because our Desire for Existence is so great that at the moment of death our Karma grasps a new being and thus perpetuates the Circle of Rebirth.
(3) That we are but the result of our previous and present Karma and have made ourselves what we are now, and which will determine our future existence and the state into which we shall be reborn.
(4) That all things in this world are things composed (Sankhara) and are impermanent, miserable and not self-contained.
(5) That the only way to escape from this world of suffering and impermanence and from the “Circle of Rebirth ” is to purify the heart of all passions (Kilesa) and from all Attachment to the“ Five Aggregates of Attachment”; to avoid evil, to do good. Having destroyed all Kilesa and Karma itself— we attain Nirvana.
08. What is Right Concentration?
It is a state of mind where all Seven Paths are present, which means that we have progressed along the Middle Path of Enlightenment and have developed the mind to such an extent that, having attained to full concentration of mind, we now become cognizant of the true facts of life and therefore begin to turn away from Wrong Speech—Wrong Action—and Wrong Ways of Living.
Thus the Middle Path of Enlightenment of the Buddha reveals itself as a gradual perfection of the mind to the highest Wisdom and Insight of the true facts of life.
In the ﬁrst Path, we gain knowledge and understanding of the Dhamma.
In the second Path, we make the Right Resolution to free the sensuality, ill will and cruelty. Having attained to Right-Mindedness and continuing to purify the mind we along the Path by attaining to Right Speech, Right Action and Right Living. In the Sixth Path we make the Right Effort to maintain the good already achieved and to avoid all further evil doing. In the Seventh and Eighth Path we reach such a degree of Concentration of mind that we are then capable of realizing the Absolute Truth and begin to reject Wrong Speech, Wrong Action, and Wrong Living.
While in other religions which are based upon faith and human ideals, “life is all or love is all”, in Buddhism “mind is all” . It is  trained mind, the mind developed to its highest capacity, to intuitive insight and wisdom which can realize  Salvation from all Suffering and fromRebirth by following the Noble Eightfold Path of Enlightenment discovered and experienced by the Buddha.
Source : www.whyyoumissit.com
Posted by Unknown at 8:33 AM