Home » »Unlabelled » What People in Indonesia Do with Their Dead is Shocking, Bizarre Tradition.

What People in Indonesia Do with Their Dead is Shocking, Bizarre Tradition. 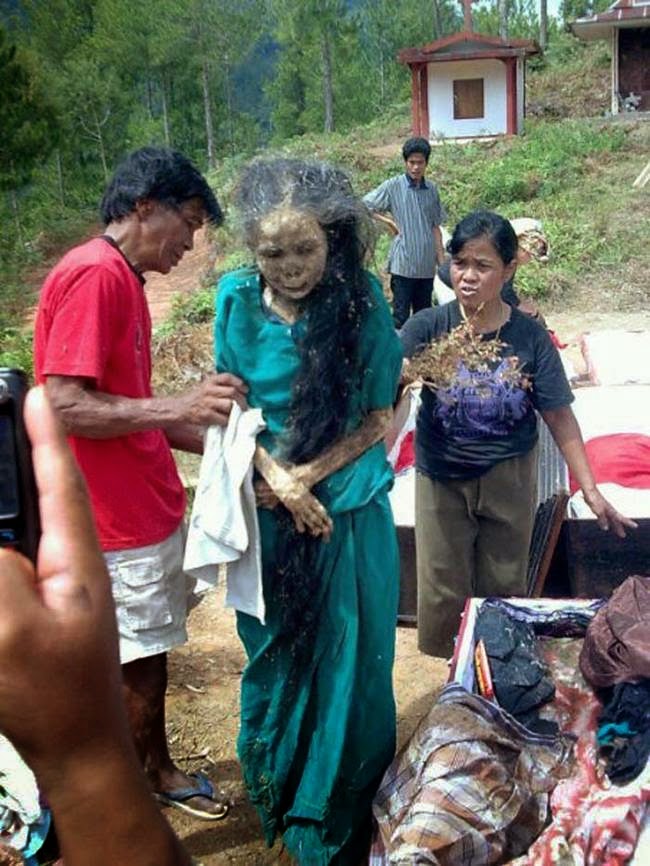 Would you ever dig up the remains of a deceased loved one to clean their corpse, repair their coffin, and dress them in new clothes? I probably wouldn't either, but that's exactly what they do every few years in Toraja in South Sulawesi, Indonesia.
I'm in awe of this people's dedication to their ancestors. Most people would be too upset or disgusted to be able to do such a thing, but these families show true love...even after death.


Every few years the people of Toraja in South

Sulawesi, Indonesia, dig up the bodies of

their deceased ancestors. They do it for a

ritual called Ma'nene, or The Ceremony of

During the ceremony the dead are washed, groomed, and dressed in new clothes.

What makes this corpse cleaning ceremony possible is that the bodies are not buried in the ground. Rather they are placed in a cave or carved stone grave. This makes it easer for villagers to access the bodies of their loved ones when the time comes.

The origin of the ritual is based on the belief that the spirit of a dead person must return to their villages.

During the ceremony, some relatives walk their bodies of their deceased loved ones around the province along straight lines.

The corpses' coffins are also repaired during the ceremony.

Even the bodies of children are exhumed and redressed during the ceremony.

In Toraja society death rituals are more important than any other rituals including births and marriages. Hence why the corpse cleaning ceremony is such a big part of life there.

Getting her hair done from beyond the grave.

H/T: The Daily Mail
source     omg.viralnova.com
Posted by Unknown at 6:25 AM