Home » »Unlabelled » The Buddhist Concept of Heaven and Hell

The Buddhist Concept of Heaven and Hell

The wise man makes his own heaven while the foolish man creates his own hell here and hereafter.
The Buddhist concept of heaven and hell is entirely different from that in other religions. Buddhists do not accept that these places are eternal. It is unreasonable to condemn a man to eternal hell for his human weakness but quite reasonable to give him every chance to develop himself. From the Buddhist point of view, those who go to hell can work themselves upward by making use of the merit that they had acquired previously. There are no locks on the gates of hell. Hell is a temporary place and there is no reason for those beings to suffer there forever. 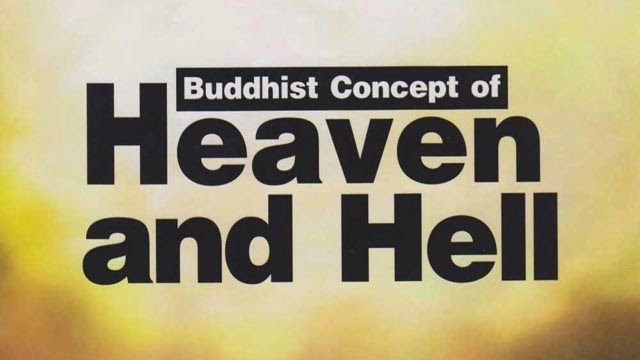 The Buddha's Teaching shows us that there are heavens and hells not only beyond this world, but in this very world itself. Thus the Buddhist conception of heaven and hell is very reasonable. For instance, the Buddha once said, 'When the average ignorant person makes an assertion to the effect that there is a Hell (patala) under the ocean he is making a statement which is false and without basis. The word 'Hell' is a term for painful sensations. 'The idea of one particular ready-made place or a place created by god as heaven and hell is not acceptable to the Buddhist concept.
The fire of hell in this world is hotter than that of the hell in the world-beyond. There is no fire equal to anger, lust or greed and ignorance.
According to the Buddha, we are burning from eleven kinds of physical pain and mental agony: lust, hatred, illusion sickness, decay, death, worry, lamentation, pain(physical and mental), melancholy and grief.
People can burn the entire world with some of these fires of mental discord. From a Buddhist point of view, the easiest way to define hell and heaven is that where ever there is more suffering, either in this world or any other plane, that place is a hell to those who suffer. And where there is more pleasure or happiness, either in this world or any other worldly existence, that place is a heaven to those who enjoy their worldly life in that particular place. However, as the human realm is a mixture of both pain and happiness,
human beings experience both pain and happiness and will be able to realize the real nature of life. But in many other planes of existence inhabitants have less chance for this realization. In certain places there is more suffering than pleasure while in some other places there is more pleasure than suffering.
Buddhists believe that after death rebirth can take place in any one of a number of possible existences. This future existence is conditioned by the last thought-moment a person experiences at the point of death. This last thought which determines the next existence results from the past actions of a man either in this life or before that. Hence, if the predominant thought reflects meritorious action, then he will find his future existence in a happy state. But that state is temporary and when it is exhausted a new life must begin all over again, determined by another dominating 'kammic' energy. This repetitious process goes on endlessly unless one arrives at 'Right View' and makes a firm resolve to follow the Noble Path which produces the ultimate happiness of Nibbana.
Heaven is a temporary place where those who have done good deeds experience more sensual pleasures for a longer period. Hell is another temporary place where those evil doers experience more physical and mental suffering. It is not justifiable to believe that such places are permanent. There is no god behind the scene of heaven and hell. Each and every person experiences according to his good and bad kamma. Buddhist never try to introduce Buddhism by frightening people through hell-fire or enticing people by pointing to paradise. Their main idea is character building and mental training. Buddhists can practise their religion without aiming at heaven or without developing fear of hell.
Source: ic.sunysb.edu
Posted by Unknown at 6:29 AM