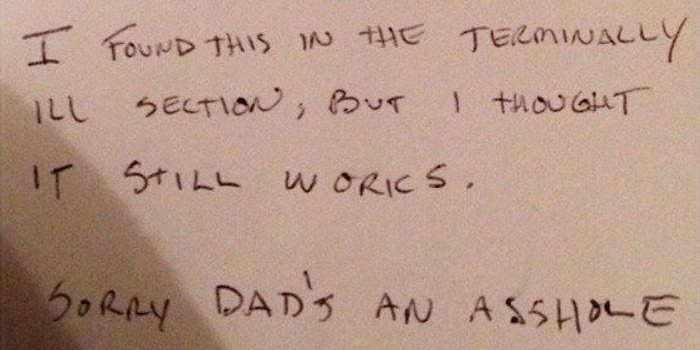 Dealing with the end of a long-term relationship can feel, at times, like dealing with the death of a loved one.
There’s the same horrifying realization that you may never see one another again — the same long grieving process following the eventual split.
When he found out his father was cheating on his mother, Ryan — known on Reddit as Citrous_Oyster — drew this connection and used it to his advantage when writing a card to his presumably emotionally drained mother.
He got a card from the “terminally ill” section, realizing that the message inside was one that praised inner strength and bravery as a coping mechanism.
Though meant for a sick relative, the card made sense for his mother, too. Getting through a rough breakup requires the use of those same emotional tools.
At the bottom of the card, under a long pre-written message, Ryan wrote his own:

I found this in the terminally ill section, but I thought it still works. Sorry dad’s an asshole. —Ryan.

While he probably could have gotten away with a “sympathy” card — yes, those exist — we think Ryan’s take is way more creative and thoughtful.
Check it out below.
source  elitedaily.com
Posted by Unknown at 6:27 AM