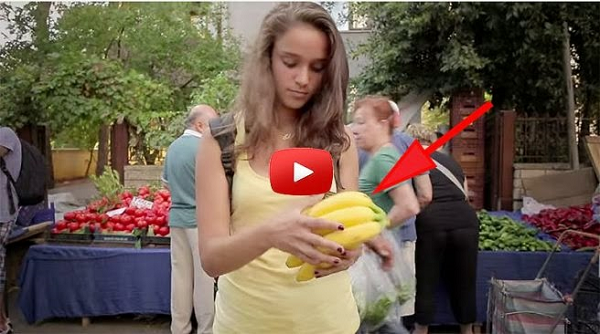 Elif Bilgin, a 16 year old from Turkey, won the 2013 Science in Action Award at the Google Science Fair for her invention of a bioplastic made from banana peels that could be used to replace petroleum-based plastics.
Thomas Edison, who was just age 14 when he began work that led to the invention of the electric light bulb, once said: “Genius is 1% inspiration and 99% perspiration.” No doubt then, Edison would have approved of 16 year old Elif Bilgin from Turkey – winner of the 2013 Scientific American Science in Action Award, powered by the Google Science Fair.
Bilgin won for her project – ‘Going Bananas’ – that uses banana peels in the production of bio-plastic as a replacement for traditional petroleum-based plastic.
The award honors a project that can make a practical difference by addressing an environmental, health or resources challenge. The goal is for it to be innovative, easy to put into action and reproducible in other communities.
“The banana peel is something we throw away everyday but little do we know all those peels may be put to use”, she said.
The reason why Bilgin anticipated that the banana peel could be used in the production of plastic is because it contains starch, which is the key ingredient in the production of bioplastic. She hopes that the use of the bioplastic could replace some of the petroleum-based plastics in use today for such applications as insulation for electric cables and for cosmetic prostheses.
This project took 2 years and the young teen endured 10 failed trials of plastics that weren’t strong enough or that spoiled quickly. However she was determined. As she put it in her project description: “Even Thomas Edison said, ‘I have not failed. I have just found 10,000 ways that won’t work.’” And finally, in her last two trials, she made plastics with the features she was hoping for.
In addition to the prize, Scientific American is flying Bilgin to the finalist awards event at Google's headquarters in California, in September 2013. And will also establish a year’s worth of mentoring to help further her work.
Asked what she believed to be the most revolutionary invention of the past 100 years? Bilgin answered: “The World Wide Web, simply because it allows information, ideas and thoughts to be shared across the globe within seconds. It has literally fulfilled its name, acting as a web bringing every continent, nation and person in the world much closer to each other.”
The Google Science Fair is an online science competition open to students ages 13-18 from around the globe. Google is looking for ideas that will change the world.

Watch the short video below as Elif Bilgin explains her project.

Credits: http://www.whydontyoutrythis.com/
Posted by Unknown at 9:24 AM