Home » »Unlabelled » She Looked Like A Normal 90-Year-Old, But Pay Attention To What She Does Once The Music Starts…WHOA

She Looked Like A Normal 90-Year-Old, But Pay Attention To What She Does Once The Music Starts…WHOA 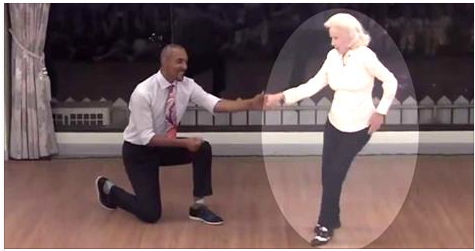 This is clearly the case for American dancer Jean Veloz. At 90-years-young she is still dancing as smooth and stylish as ever. Jean is known for doing a style of dance which goes back to the 1930’s. It combines jazz, tap, breakaway and the Charleston. This dance combo known as Lindy, has been one of the favored styles of swing dancers.
Dancing was popular with teens in the 1940’s and Jean was on board with the trend, eventually becoming good enough to win first place in a jitterbug competition. It would be her move to Los Angeles with her brother where she really honed in her skills, dancing at all the hot spots with the best of the best. Another competition arose and Jean won it, earning her a Screen Actors Guild card, as well as a dance cameo in a movie called Swing Fever! This is what really put Jean on the map.
Jean would go on to partner up with Frank Veloz, one of the most famous dancers at the time. They danced together on Frank’s television show for five years and ended up getting married. Frank died in 1981, and Jean then decided to retire from dancing. But in 1992, the dancing bug came back and she emerged from retirement. In 1996 she became inducted in the California Swing Dance Hall of Fame.
In this wonderful video you will get to see an incredible display of dance moves emanating very smoothly and freely from a 90-year-old woman who looks as fresh as ever as she switches dance partners and put’s them through the paces. You will also get to celebrate Jean’s birthday with her and her friends!
ake sure to Like Us on facebook to see more awesome things like this

source  damn.com
Posted by Unknown at 1:11 AM