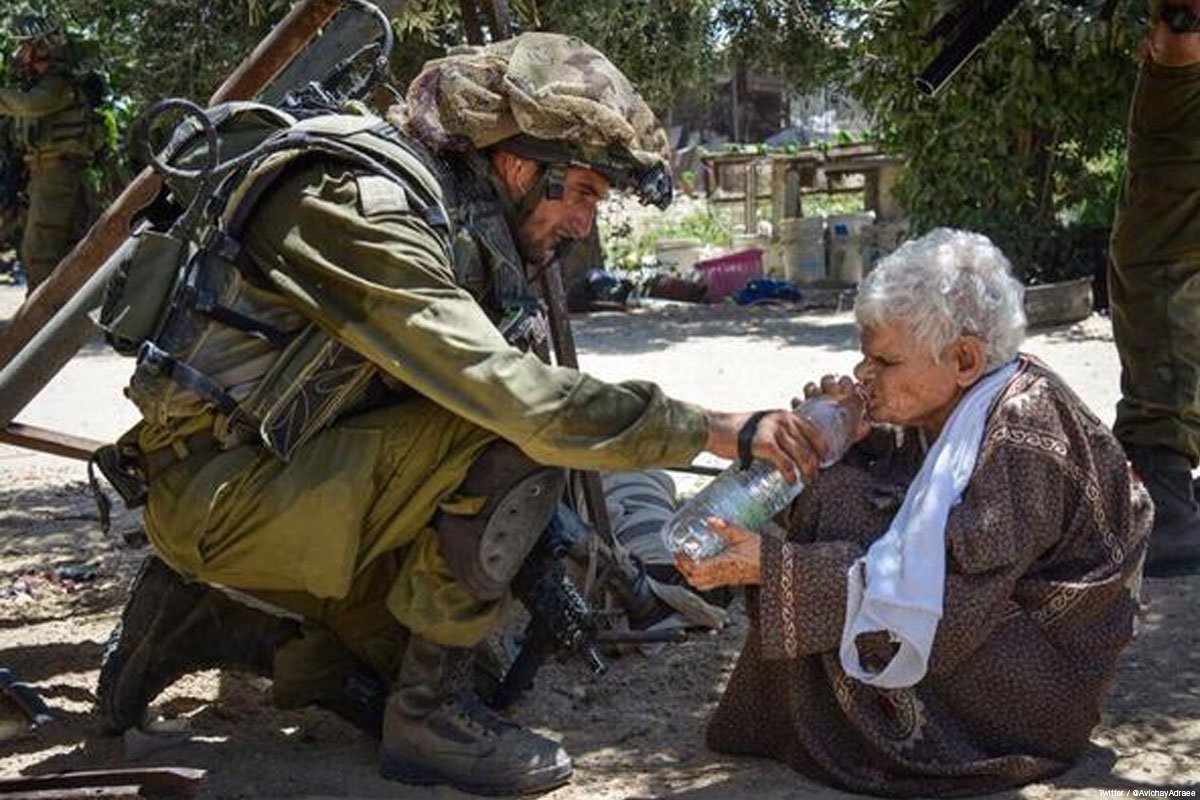 During the Israeli bombardment and shelling of the Gaza Strip last summer, an Israeli soldier approached a 74-year-old Palestinian woman Ghalya Abu-Rida to give her a sip of water. He gave her the water, took a photo with her and then he shot her in the head from a distance of one metre. He then watched as she bled to death, the Palestine Information Centre reported.

This is how Ahmad Qdeh, a journalist in Al-Aqsa TV, described the scene that he witnessed during the latest Israeli aggression. The spokesman of the Israeli army, Avichay Adraee, shared the photo of an Israeli soldier holding the water bottle and helping the old woman drink as an example of the “humanity” of the Israeli army towards the civilians in the Gaza Strip.

The field executions were among the stories Qdeh reported during the Israeli aggression on Gaza Strip. He said: “Ghalya Ahmad Abu-Rida lived in the Khuza’a area in the east of Khan Younis city. I live in that area too and I made a television report on her story after the Israeli soldiers executed her during the aggression.”
“During the aggression, an Israeli soldier approached the old woman and took a photo for another soldier while giving her water. They then executed her by shooting her in the head from a distance of one metre and let her bleed until she died,” he added.
Ghalya was born in 1941. She lived by herself in a room near her brothers’ house in the Abu-Rida neighbourhood of Khuza’a. She had no children. Her neighbourhood was one of the first places invaded by the Israeli army during the aggression.

Majed Abu-Rida, Ghalya’s nephew, confirmed to the media that his aunt was visually impaired and could hardly see. He said that the Israeli army had falsely claimed humanity while executing his aunt in cold blood.
Ghalya, with her weak body and white hair, refused to leave her house after the Israeli army ordered the residents of Khuza’a to evacuate. She thought her old age would protect her from being a target so she stayed in her home and refused to join the majority of the residents who left the area as the invasion began.
On 3 August, the Israeli forces announced a truce and allowed medical staff to reach the Khuza’a area. Ghalya was found dead after she bled to death as she was shot in the head near her house, Al-Aqsa TV confirmed to MEMO. Her brother confirmed that the photo shared by the Israeli army supported the family’s belief that Ghalya was in the hands of the Israeli army. The family also believed that the area in which Ghalya appeared in the photo and in which she was found asserted that the Israeli forces killed her after taking the photo for the media.

Professor of media at the universities of Gaza, Ahmad Al-Farra, said: “The photo the Israeli army spokesman shared is misleading propaganda by the Israeli army to present a humane portrait of its soldiers. It can enhance the opportunity to pursue the Israeli army’s soldiers as war criminals before the International Criminal Court.”
“This photo proves the confusion of the Israeli army spokesman in defending his army. It proves that they killed civilians,” he added.
He continued: “The Israeli occupation lies and misinforms in an attempt to affect international public opinion. It exploits the Arab media and Palestinian diplomacy in exposing the Israeli occupation’s crimes.” He demanded launching a large campaign to expose the Israeli lies and falsifications.
Al-Farra stressed the need for a media enlightenment campaign to go side by side with the field battles to correct the false image that Israel presents about its army and the resistance.
Israel carried out a 51-day war that claimed the lives of around 2,200 Palestinians and wounded around 11,000 others.
source    www.conspiracyclub.co
Posted by Unknown at 8:15 PM