Home » »Unlabelled » Men Are Painting Their Fingernails. But The Reason Why Might Surprise You…

Men Are Painting Their Fingernails. But The Reason Why Might Surprise You… 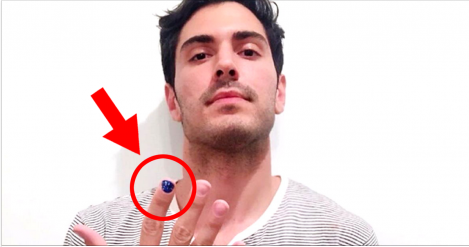 For the most part, I consider brightly colored fingernails to be something of a girl thing. I have absolutely nothing against anyone painting their nails, but it’s something most guys probably don’t do on a regular basis. But what if they had a reason to? And what if it really means something, something important, something that can hopefully make a difference? I’d like to think that a lot of guys would be on board, and it turns out that they are.
Tons of men are painting their nails, or rather their nail. A campaign called #PolishedMan is encouraging all men to paint just one nail for a week, and it’s successfully raising funds and awareness for a cause. This one fingernail represents something quite significant: it represents the 1 in 5 children who will be a victim of sexual abuse at some point in their young, innocent lives. Why #PolishedMan and not #PolishedWoman? Most sexual violence is inflicted at the hands of men, so it is men that must be the voice of change.
When Elliot Costello visited Cambodia, he met a girl named Thea, a sexual abuse victim, who changed his life. They painted their nails together and Elliot vowed to always keep one nail painted to remember her. #PolishedMan grew from this single meeting. Watch Elliot and Thea’s story below.


Share this with your friends and family by clicking the button below.