Home » »Unlabelled » This father of 1 son sees the corpse of his dead wife again and posts THIS on Facebook! His message gives hope back to all mourning people.

This father of 1 son sees the corpse of his dead wife again and posts THIS on Facebook! His message gives hope back to all mourning people. 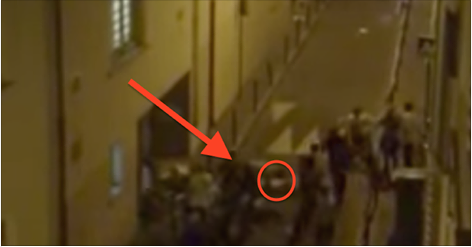 Antoine Leiris is a French journalist. He lives perfectly happy with his wife, whom he has desperately loved for the last 12 years. 17 months ago, they started a family and both became parents of a little boy, Melvil. But the ISIS terrorists put a violent end to the joy and happiness of this family on Friday 13th, during the terrible attacks in Paris.
His beloved spouse is killed in the Bataclan concert hall in Paris. Antoine is deprived of the love of his life and from now on, he has to raise his child all alone. On Monday 16th, he finally had the chance to see the body of his wife for the final time and bid her adieu. Shortly afterward, he decides to publish this stirring message.
“You will not have my hatred.
On Friday night, you stole the life of an exceptional being, the love of my life, the mother of my son, but you won't have my hatred.
I don't know who you are and I don't want to know - you are dead souls. If this God for which you kill indiscriminately made us in his own image, every bullet in the body of my wife will have been a wound in his heart.
So no, I don't give you the gift of hating you. You are asking for it but responding to hatred with anger would be giving in to the same ignorance that made you what you are.


You want me to be afraid, to view my fellow countrymen with mistrust, to sacrifice my freedom for security.You have lost.
I saw her this morning. Finally, after many nights and days of waiting. She was just as beautiful as when she left on Friday night, just as beautiful as when I fell hopelessly in love over 12 years ago.
Of course I'm devastated with grief, I admit this small victory, but it will be short-lived. I know she will accompany us every day and that we will find ourselves in this paradise of free souls to which you'll never have access.
We are two, my son and I, but we are stronger than all the armies of the world.
I don't have any more time to devote to you, I have to join Melvil who is waking up from his nap. He is barely 17-months-old. He will eat his meals as usual, and then we are going to play as usual, and for his whole life this little boy will threaten you by being happy and free. Because no, you will not have his hatred either.” 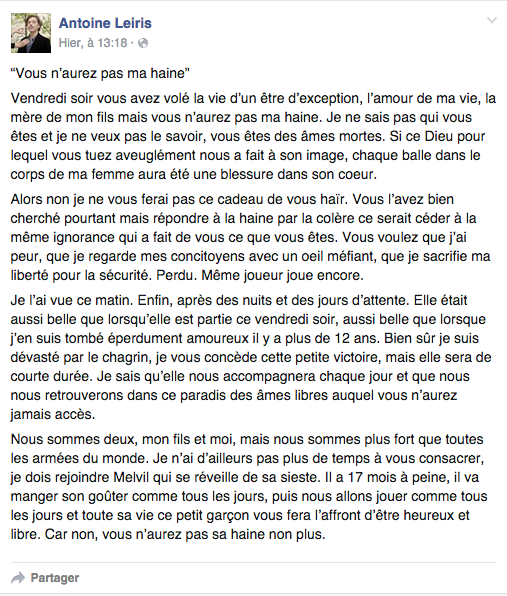 Nobody was left unmoved by Antoine’s message on Facebook. Tens of thousands of people around the world have already shared these lines.
If you also want to say to terrorists, that their barbaric cruelty won’t stop you from leading a normal life, and if you think that happiness and love are the best weapons against these massacres, then share Antoine’s message.

source  www.hefty.co
Posted by Unknown at 7:36 AM