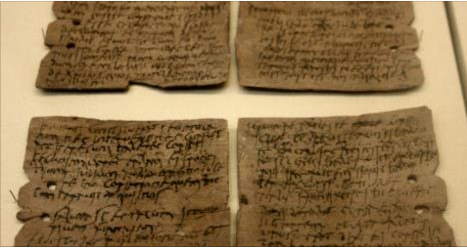 Rome| An Italian expert studying a first century document written by the Roman historian Marcus Velleius Paterculus that was recently discovered in the archives of the Vatican, found what is presumed to be the first eyewitness account ever recorded of a miracle of Jesus Christ. The author describes a scene that he allegedly witnessed, in which a prophet and teacher that he names Iēsous de Nazarenus, resuscitated a stillborn boy and handed him back to his mother.
Historian and archivist Ignazio Perrucci, was hired by the Vatican authorities in 2012, to sort, analyze andclassify some 6,000 ancient documents that had been uncovered in the gigantic archive vaults. He was already very excited when he noticed that the author of the text was the famous Roman historian Velleius, but he was completely stunned when he realized the nature of the content.
Professor Perrucci found the text in the archives of the Vatican, while searching amongst a bundle of personal letters and other trivial documents dating from the Roman era.
The text as a whole is a narrative of the author’s return journey from Parthia to Rome that occurred in 31 AD, recorded in a highly rhetorical style of four sheets of parchment. He describes many different episodes taking place during his trip, like a a violent sandstorm in Mesopotamia and visit to a temple in Melitta (modern day Mdina, in Malta).
The part of the text that really caught M. Perrucci’s attention is an episode taking place in the city of Sebaste (near modern day Nablus, in the West Bank). The author first describes the arrival of a great leader  in the town with a group of disciples and followers, causing many of the lower class people from neighbouring villages to gather around them. According to Velleius, that great man’s name was Iēsous de Nazarenus, a Greco-Latin translation of Jesus’ Hebrew name, Yeshua haNotzri.
Upon entering town, Jesus would have visited the house of a woman named Elisheba, who had just given birth to a stillborn child. Jesus picked up the dead child and uttered a prayer in Aramaic to the heavens, which unfortunately the author describes as “immensus”, meaning incomprehensible.  To the crowd’s surprise and amazement,  the baby came back to life almost immediately, crying and squirming like a healthy newborn.

Marcus Velleius Paterculus, being a Roman officer of Campanian origins, seems to perceive Jesus Christ as a great doctor and miracle man, without associating him in any way to the Jewish concept of Messiah.
Many tests and analysis have been realized over the last weeks to determine the authenticity of the manuscript. The composition of the parchment and ink, the literary style and handwriting have all been carefully scrutinized and were considered to be entirely legitimate. The dating analysis also revealed that the sheepskin parchment on which the text is written, does indeed date from the 1st century of this era, more precisely from between 20-45 AD.
This new text from an author known for his reliability, brings a brand new perspective on the life of the historical character that is Jesus of Nazareth. It comes to confirm the Gospels on the facts that he was known for accomplishing miracles and that his sheer presence in a town was enough to attract crowds of people.
A complete and official translation of the document should be made available online in many different languages over the next few weeks, but the impact of the discovery is already felt in the scientific community. Many scholars have already saluted the finding as one of the greatest breakthrough ever realized in the study of the historical life of Jesus, while others have expressed doubts about the conclusions of Professor Perrucci and demand for more tests to be performed by other scientific institutions before drawing any conclusions.
Via worldnewsdailyreport
Posted by Unknown at 4:29 AM