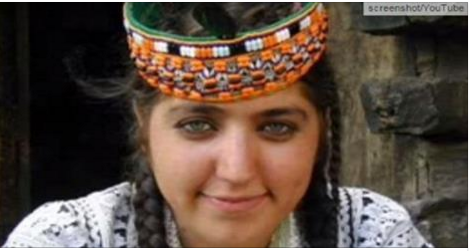 The Hunza with a population of about 87,000 and residing in the mountainous regions of Pakistan are believed to be descendants of Alexander the great and his army. It is understood today that Alexander the great’s army integrated with the people at the time of his conquest and some of them remained in the region marrying the natives.
It is believed that descendants of this tribe lived to 160 years and a person living to 120 years is deemed as a common and perfectly natural phenomenon in these parts.  They all look so young and youthful, they even have 65 year old women still conceiving and giving birth to this day. You will be forgiven for calling a middle-aged woman a teenager; it is so difficult to make out the age of an average person.
A classic case in point occurred in 1984 when Said Abdul Mobudu a Hunza elder states man arrived at the Heathrow airport in the London. When his passport was checked by the airport staff and his date of birth was seen it caused quite a stare as he was believed to be born in 1832 making him at the time of his arrival in London an astounding 152 years.
But what are their habits?
Their diet consists mainly of apricots and the consuming of large amounts of apricots a day has been deemed as the number one reason why there is no reported case of tumors there. The apricot seeds are very rich in the vitamin B-17, a vitamin known for its anticancer properties. While consuming the apricot seed in itself could be dangerous because of its high arsenic content, it is their consumption of small amounts that has proved to be effect. They also make oil from its seed and so the fruit is fully utilized.
Having several apricot trees in one’s compound has been seen as a thing or pride and the tree is a sort of icon to the Hunza people.
The Hunzas are known for their long walks averaging between 15 and 20 kilometers a day and for eating just twice in a day – they have only breakfast and lunch; they also only eat food indigenous to their land such as raw fruits, vegetables and nuts. They eat a lot of dried apricots, legumes and an array of cereals like barley, millet and buckwheat. Their diet also consists of milk, cheese and eggs.
They do not have snacks, nor do they eat meat and when they do consume meat it is usually just about twice in a full year and usually just chicken or lamb. By doing this, they ensure that their body’s metabolism is not stretched.
It is in accordance to their traditional practice that the Hunza people do not eat anything for an extended period of two to four months. At this time they only drink dried unripe apricot juice. Today doctors believe that their diet and sustained periods of fasting has contributed to their good health and longevity.
The Hunza are truly a remarkable people they bathe in icy cold water regardless of if it’s at sub-zero temperature levels.
They are nature’s true testament to the benefits of a healthy lifestyle and indeed nature’s bastion of the proverbial fountain of youth.


Source: www.healthtipsportal.com
Posted by Unknown at 7:31 AM