Home » »Unlabelled » This 65-Year-Old Man Displays His Child Bride In Public, This Is How People Reacted!

This 65-Year-Old Man Displays His Child Bride In Public, This Is How People Reacted! 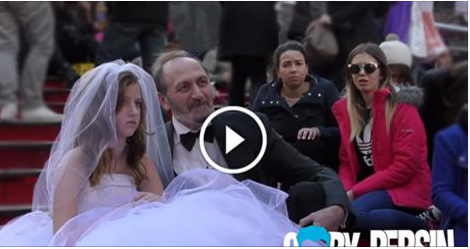 Child bride exists until this very day and each year, about 15 million girls are being married as children. Though poverty and culture contributed highly to this practice, in some countries, it only needs a parent’s consent for this uncanny marriage to happen.
If we don’t act now, more than 1.2 billion girls will be forced into child marriage by 2050, according to the United Nations Population Fund.


As this issue rises, YouTuber Corby Persin set up a social experiment to see how people would react once they see an old man being married to a young girl.

The startling video taken in Time Square, New York, shows a 65-year-old pensioner posing for photographs with his 12-year-old bride.

The odd couple left everyone open-mouthed in disbelief and it didn’t take long for someone to intervene.

One woman asks the girl if she was OK, the groom immediately cuts in and said it was fine as he had her parents’ permission.

Then a man steps in saying, “This is not right, you know this isn’t right. You can not do this to a little girl.”

Another woman tries to reason with the old man and took the girl away from him.

The stunt gathered quiet some crowd and many were left in dismay and causes an outrage, which clearly shows child marriage isn’t right.


Via: Mirror
Apparently, child marriage has been legal in 91 countries worldwide. In the state of Massachusetts, girls can marry at age 12 with their parents’ consent, while in California there is no minimum age with approval of a superior court judge and parental consent. Meanwhile in Syria, the legal age is 17 for girls and 18 for boys but girls have been sanctioned by religious leaders to marry at 13.
This child bride stunt was inspired by the original campaign done by a group called “KAFA” which shows the sad reality of child marriage, where thousands of young girls in Lebanon, Syria and around the world are forced into this sickening ordeal.
Posted by Unknown at 8:08 AM