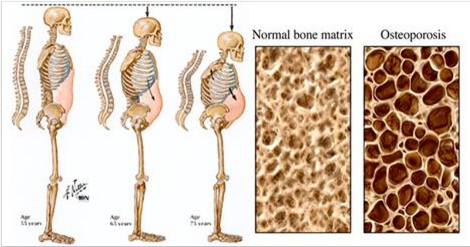 Statistics says that Americans like drinking their soda more than ever. Devastating amounts of soft drinks are consumed every day, and in numbers that would be 25%. Yes, 25% of all drinks sold in the US are actually soft drinks.
In 2000, Americans bought 15 billion gallons of soda, or a 12-ounce can per day for each citizen, regardless of their age.
The Internet is loaded with information about the devastating effect of this extremely unhealthy addiction, but in case that is not enough for you, we give you some more information that will open your eyes. At least that is what we hope.
Soda and Osteoporosis
Cola soda includes caffeine and phosphoric acid in its content.
The Framingham Osteoporosis Study tested the bone mineral density (BMD) of 1413 women and 1125 men in 2006 and discovered that the regular consumption of Cola caused a significant reduction of BMD in the hips of female subjects, which are much more susceptible to bone loss when compared than men.
According to several studies, the cause of this phenomenon is excess amounts of phosphorous, which prevents the absorption of calcium. Moreover, experts claim that phosphoric acid in cola leads to a leakage of calcium out of bones.
One other study found that the consumption of 330 mg of caffeine, or four cups of coffee leads to bone loss. It is believed that caffeine interferes with the absorption of calcium and causes loss of calcium through urine.
Therefore, soda should be avoided at all cost in the case of osteoporosis, or diseases which prevent the absorption of calcium, like Crohn’s disease, as well as by people older than 50.
Obesity
If you need something to blame your extra pound on, it is your favorite can of soda. Soft drinks high up on the list of obesity causes. A single can of sugar-laden soda gives you an extra pound of weight gain every month.
If you think of switching to diet soda, we bet that you will not like this one. Diet soda is even more harmful, because it is packed with artificial sweeteners that may trigger an entire array of hormonal and physiologic issues which eventually make you fat.
Liver damage
It is the worst thing you can get to your liver. Excessive consumption of soda increases the risk of cirrhosis dramatically, which is exactly what happens to chronic alcoholics.
Tooth decay
Soft drinks damage tooth enamel and that is the smile you do not want in the mirror. Soda is highly acidic, and its chemical composition can cause even greater damage to your teeth than sugars added to candies.
Kidney stones and chronic kidney disease
Your loving Cola is ‘enriched’ with phosphoric acid, known for its ability to affect your urinary tract. These changes go to the extent that eventually you will have your kidneys filled with stones. By consuming 12-ounce cans you actually increase the risk of forming kidney stones by 15 percent.
Sources:
www.realfarmacy.com
Posted by Unknown at 7:29 PM