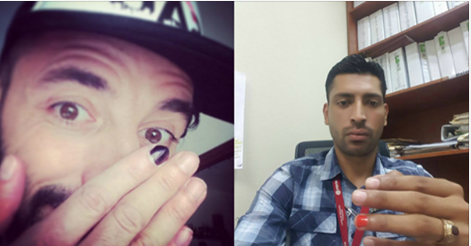 If you’ve seen a man with a single painted fingernail, you probably think that it’s one of those ludicrous hipster statements, something like the man-purse or saying that Animal Collective is actually listenable.
While it’s a statement, it’s a statement of a different kind — one of men taking a stand against the sexual abuse of children around the world.
The movement, started by Elliot Costello, is called A Polished Man, and seeks to get men to paint one fingernail to represent the 1 in 5 children who will suffer sexual abuse. Costello was inspired by meeting a girl named Thea in Cambodia while doing missionary work for a group called Hagar International.

“Despite their language barrier, Elliot and Thea connected over naughts and crosses,” the Polished Man website reads. “At the end of the night, Thea drew a love heart on Elliot’s palm, and colored his nails bright blue.
“The next day Elliot learnt about Thea’s life story. Thea’s mother chose to send her to an orphanage in hope that Thea would be granted a safe refuge following her father’s death,” the site explained. “She was given anything but; at just eight years old, Thea was raped on a daily basis for two years by the orphanage carer — the very man who was meant to protect her.”
That’s when Costello started the Polished Man organization. As he states on the website, men need to be the ones who stick up for young girls, as men are responsible for 96 percent of child sex abuse worldwide.

The movement started on Oct. 1, but as you can see, it’s already gained a bit of traction. If you’d like to join or donate to Costello’s cause, the website is here.
H/T Conservative Tribune
Posted by Unknown at 8:18 AM