Home » »Unlabelled » Police Officer Holds A Starving Baby, But What She Does Next? It’s Going Viral…

Police Officer Holds A Starving Baby, But What She Does Next? It’s Going Viral… 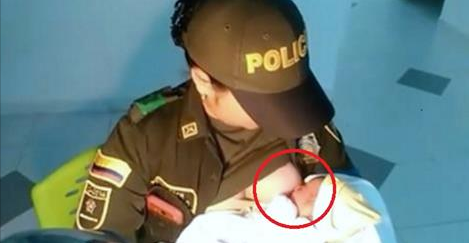 Police Officer Holds A Starving Baby, But What She Does Next? It’s Going Viral…
Via StunningThings
A woman named Edinora was collecting oranges in a Colombian forest when she heard something crying from the bushes. There, hidden among the thick brush and undergrowth, was a tiny newborn baby girl. The baby was abandoned by her own mother just hours after she was born.
Officer Luisa Fernanda Urrea arrived at the scene. At first, she thought she was looking at a cat — but as she got closer, she was shocked to realize it was a human baby.
The newborn still had part of her umbilical cord attached. She was also starving and on the brink of hypothermia. That’s when Officer Urrea, who recently became a mom, did something that thousands of people across the world are calling a heroic, selfless act of kindness and humanity — something the officer says any woman would do in the same circumstances…
Officer Urrea was shocked to discover a newborn baby had been abandoned by her mother in a Colombian forest. The infant girl, who still had her umbilical cord attached, was starving.
That’s when Officer Urrea sprang into action, tapping into her motherly instincts.
Since Officer Urrea recently became a mother, she knew she was able to breastfeed the newborn and possibly save her life.
A viral video was posted to Facebook showing Officer Urrea calmly breastfeeding the starving infant.
Now, viewers across the world are hailing the officer a hero for going above and beyond.
As reported, the Colombian Family Welfare Institute is now caring for the baby while they seek an adoptive family.
At the time this story was reported by CES news, police were still looking for the baby’s birth mother, who may face criminal charges.