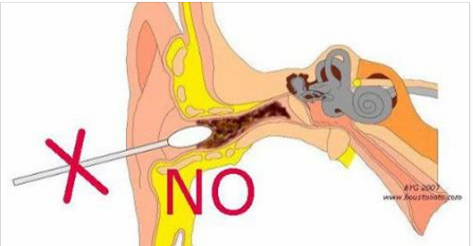 Our ears produce waxy oil called earwax, or cerumen, which serves as its natural lubricant.
The role of this wax is to impede any damage of this sensitive area, caused by bacteria and other particles or organisms.
However, if deposited in larger quantities, it can become irritating and annoying, and can lead to other symptoms like irritation, itching, dizziness, hearing loss or a feeling that there’s something stuck in the ear.
This happens as a result of the obstruction of the ear canal. Even though this substance is cleaned naturally, we feel the need to clean them periodically and eliminate the excess amounts.
Namely, the use of cotton swabs for cleaning the ear canal in fact has the reverse effect. This practice pushes the earwax deeper into the ear canal, where it starts to accumulate, and eventually leads to an obstruction.
Furthermore, note that the regular use of earplugs or earbud headphones can increase the risk of excessive earwax deposits in the ear canal.
In the case of earwax buildup, one can experience several symptoms, including:
Hence, you need to remember that in order to prevent the symptoms of excessive earwax buildup, you need to clean the ears regularly, and thus avoid its blockage. Yet, you should never use Q-tips or other swabs.
Instead, we suggest these effective natural remedies to remove excess earwax:
Hydrogen peroxide
Combine 3% hydrogen peroxide and water in equal amounts and drop a bit of the soltuion in the ear. To let it enter the ear canal, shake your head a bit. After a few minutes, tilt your head to the opposite side in order to force the liquid to drain out.
Olive oil
This amazing oil is another remarkable natural remedy which initially softens earwax, and then helps its removal. Namely, all you need to do is to drop two or three drops of olive oil in the ear at bedtime, and sleep on the opposite side. This treatment should be done for 3 or four nights.
Paraffin oil
Paraffin oil is extremely effective, and one of the safest ways to remove earwax. Being so effective, it can be found in most pharmacies. Heat two to three tablespoons of paraffin oil over a candle flame, and apply a few drops in your ear.
Then, try to lie still for several minutes, and rinse it out with some warm water.  In order to completely dissolve earwax buildup, repeat this procedure 3 days in a row.
Saline solution
This is another effective way to remove earwax. Soak a cotton ball in the following solution: dissolve one teaspoon of salt (7.5 g) in ½ cup of water (100 ml).
Then, tilt the head on the side to help the drops enter the ear. Wait for several minutes for the solution to enter the ear canal and soften the earwax. Then, tilt your head in the opposite direction to force the remaining solution to drain out. You can use a tissue for it.
Vinegar and alcohol solution
In a small bowl, combine equal parts of white vinegar and rubbing alcohol. Soak a cotton ball into the mixture and use it to apply a few drops of the solution to each ear.
Glycerin
This natural product can also be bought in almost all pharmacies. It is extremely effective in softening and removing wax from the ear. Glycerin initially soften earwax for easy removal. For fastest results, apply four drops in each ear, three times a day.
Source: supertastyrecipes.com
Posted by Unknown at 6:47 AM