Home » »Unlabelled » 80-YEAR-OLD MAN WALKS 20 KILOMETERS TO SELL BAGOONG AND TO EARN MONEY FOR HIS FAMILY!

80-YEAR-OLD MAN WALKS 20 KILOMETERS TO SELL BAGOONG AND TO EARN MONEY FOR HIS FAMILY! 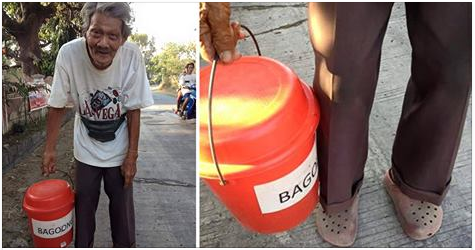 Filipinos are known as the people who loves to work hard for their family. In fact, Filipinos are even known as the ones who would really do anything and everything for the sake and safety of their families.
Now, a story about an old man is now circulating online and has been touching the hearts of the netizens!
An 80-year-old man named Manong Lauro walks at around 20 kilometers a day to sell his Shrimp paste or more popularly known as "Bagoong". This old man walks from Bitukang Manok in Pandi, Bulacan to Real de Cacarong just to sell his bagoong and to earnmoney for his family. Despite that he's just earning 50 Pesos a day, this old man still continues doing it because of the thought that he'd still be earning money for food.
Via ChosenTrends , Facebook