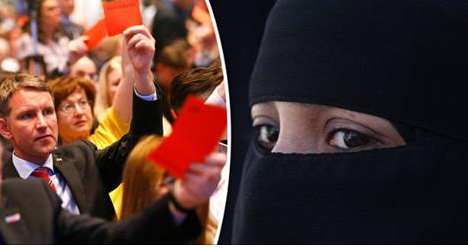 A RIGHT-WING party in Germany has adopted an anti-Islam policy, calling to ban the burka and claiming Islam is “not part of Germany”.

Alternative for Germany (AfD), which has gained a surge in support since the arrival of more than one million migrants last year, launched its election manifesto calling for measures against “Islamic symbols of power” at its party conference.
Delegates also backed a ban on minarets on mosques and the call to prayer, saying Islam isn’t part of the constitution.
The manifesto, entitled ‘Islam is not part of Germany’, was agreed in a vote of around 2,400 party members.
Many members cheered calls for measures against Islamic symbols and jeered a plea for dialogue with Germany's Muslims.

Hans-Thomas Tillschneider, an AfD lawmaker, said: "Islam is foreign to us and for that reason it cannot invoke the principle of religious freedom to the same degree as Christianity.”
The AfD’s proposals also include withdrawal from the euro and the re-introduction of conscription.
The start of the party conference in Stuttgart, southwest Germany, was disrupted by


Hundreds of demonstrators burned tyres and hurled fireworks and stones in an attempt to disrupt the gathering of the anti-immigration party. GETTY
Clashes broke out between left-wing protestors and police yesterday before the conference
More than 1,00 heavily-armoured riot police used tear gas, pepper spray and a water cannon to push back the crowd, many of whom were dressed in black and wore masks.
Germany is home to nearly four million Muslims, about five percent of the total population. 
The AfD has had a surge of support after a backlash against Angela Merkel's liberal refugee policy
Last month the head of Germany's Central Council of Muslims likened the AfD's attitude towards his community to that of Adolf Hitler's Nazis towards the Jews.
Reiner Hoffmann, the head of Germany's DGB confederation of trade union blasted the AfD’s programme as hate campaign against refugees. EPA
More than 1,000 riot police attended the tense standoff yesterday
Founded in 2013, the AfD achieved gains in three state elections in March after opposing Chancellor Angela Merkel’s decision to accept a million migrants in 2015.
Posted by Unknown at 5:46 PM