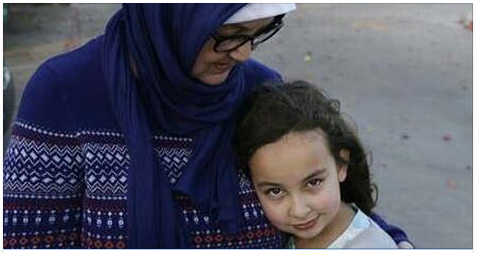 When Melissa Chance Yassini came home from work on Dec. 8, she found her daughter Sofia in tears.

Sofia had been watching the news with her grandmother, when she heard about Donald Trump's call to deport refugees and ban Muslims from entering America.

"She ran to me with a look of absolute fear on her face," Melissa told Upworthy.
Sofia, who is 8 years old, was convinced that Trump wanted to kick her and her family, who are Muslim — and American citizens — out of the country.
"It was the first time that it really drove home to me that we’re in a dangerous place right now," Melissa said.

Melissa stayed up most of the night comforting and reassuring her daughter. Exhausted and frustrated, she posted about the experience on Facebook the next day.

The post caught the eye of Kerri Peek, an Army veteran from Colorado, who responded to Melissa a few days later.

"Salamalakum Melissa!" Peek wrote on Facebook. "Please show this picture of me to your daughter. Tell her I am a Mama too and as a soldier I will protect her from the bad guys."

Peek — who is Hispanic — told Upworthy that her heart broke reading Melissa's post, which reminded her of similar statements that have made her own family feel unwelcome.

"It bothered me all night. Stuck in my craw, so to speak," Peek said. "This rhetoric and fear, hate, and violence is not okay. It's not the United States that I would fight for. I was awake all night."

Peek started a hashtag — #IWillProtectYou — and encouraged her fellow vets to respond. The messages of support began pouring in.

"Calling all vets. I've been reading reports of kids being harassed and accosted because of their faith. This is UNAMERICAN. Now is the time to act," veteran Andres Herrera wrote on Facebook.

"Let Muslim children know that we will not hurt them. That they are safe here in America. That we will protect innocents as we always have and by added benefit keeping our oaths to uphold and defend the Constitution," Herrera added.

"I am not Muslim," veteran David Bruce wrote on Facebook, "But when anyone says the Army that I served with will go on to remove Muslims from my country, they'll have to take me too."

SHARE
Photo by David Bruce/Facebook. Used with permission (on the contingency that I mention Bruce said, "I thought photo filters would hide how messed up my gear looks. They didn't. Oh well.”)

"Sweet girl, I am no longer in the Navy, but know you are protected," veteran Sarah Cullen wrote. "‪#‎IWillProtectYou‬ to the moon and back if necessary. Many hugs sent your way."

"We are Muslim, an Army family, and we will protect you," Aneesah Hydar wrote on Facebook.

As the responses continue to come in, Peek remains blown away — but not surprised — by her fellow vets' willingness to stand up to bigotry.

"I have always been proud of my Battle Buddies (we are all comrades-at-arms)," Peek said. "But this is outstanding."

Melissa told Upworthy she is incredibly moved by the show of support for her daughter.

"I have probably received close to 500 messages from various people in our military, from just people," Melissa said.
"Christians, atheists, Jews, every walk of life, every stage, have reached out to Sofia and I with overwhelming support and love."

Most importantly, Sofia now knows there’s an army of her fellow Americans who have her back.

Peek's message came through loud and clear: No matter what Donald Trump says that makes Muslim-Americans feel unsafe and unwanted, there are men and women in America's armed forces who won't stand for it.
"I read each and every message to her," Melissa said. "And she now understands that we’re all part of a fabric which is America."