Home » »Unlabelled » Dad Kicks Out His Wife And Kids. 30 Years Later He Glances At A Waitress And Realizes It’s…

Dad Kicks Out His Wife And Kids. 30 Years Later He Glances At A Waitress And Realizes It’s… 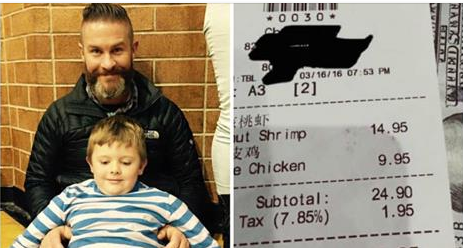 When Sean Whalen was just a young boy, his parents had a huge argument which resulted in his dad kicking out Sean, his mother and his brother. He recalls the day he came home to find his father had changed the locks and would have nothing further to do with the family.
Now 30 years later, Sean is a father to three kids and because of his tough past, he has developed a huge respect for his mother and the efforts she went to in order to bring up Sean and his brother.
During a recent trip to a Chinese restaurant Sean and his son regularly frequent, Sean noticed a new waitress. She stood out as all the other staff were Chinese and she was not.
“Over small talk and water refills, I got the sense that this single mom didn’t want to be there, but had to be there and she was doing her best to smile,” Sean wrote on Facebook. “It tore my heart out.”
The waitress reminded Sean of his mother and after the meal he decided he would do something very special for her.
He then took to Facebook where he recounted the following story:

DIVORCE.
The day my parents split up is forever etched in my mind.
Me and dad get into a big fight.
Me, mom and my little brother take off cause my dad is going nuts.
We stayed at a hotel that night.
When we came back the next day my dad had changed the locks.
I watched my mom plead with him through the door to let us in to get clothes etc.
He wouldn’t.
We had to go back later that day with a police escort.

I’ll never forget the cops handing me a black trash bag saying I had 10 minutes to take the necessities.
I loaded up all the clothes I could fit into the bag, and that was the last time I ever stepped foot into the house I was raised in.

No baseball trophies.None of my 10,000 baseball cards.None of my stuff.Hell, I left my pet turtle.
Me, mom and my little brother moved into a little condo and didn’t have jack shit.
People from the church brought over pots, pans, couches, beds, and food.

My dad cashed out the bank and literally left my mom with the money in her pocket.