Spanish Matador Gets Brutally Gored To Death On Live TV 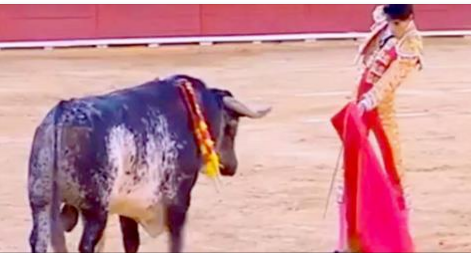 There are a lot of mixed feelings about the Spanish sport of bullfighting; on one end of the spectrum the animal activists have a point in that the animals don’t deserve to be tortured for human spectatorship – it’s legitimately cruel.

Then on the other hand you have the issue with the traditionalists who state they can’t just let go of such a large part of their heritage and culture, another understandable argument. Regardless of which side you’re with, it’s safe to say that the loss of life during events like these is always a tragic affair. Unfortunately we’ve now seen the first death in the sport since 1985 when Jose Cubero Sanchez was gored in the heart after becoming a last-minute replacement for another bullfighter.
Twenty-nine-year-old Spanish matador Victor Barrio was a star in Spain; as one of the top bullfighters in the entire country he pulled in quite the crowd to the Teruel, which was packed with fans – one being his wife. Images from his training showed he wasn’t slacking off in the days leading up to the event and he felt confident in his ability to perform, but you can never set a solid plan when something as unpredictable as a bull becomes a part of it. You just can’t predict it all.

Make sure to Like Us on facebook to see more amazing stories like this. You can see the moment the bull’s horn sinks deeper into his chest, ultimately killing him and claiming the first bullfighter’s life in over three decades. Can you imagine the horror his wife suffered as she watched from the crowd?