Home » »Unlabelled » THIS 5-year-old Girl Guides Her Blind Father While Working Will Bring You to Tears!

THIS 5-year-old Girl Guides Her Blind Father While Working Will Bring You to Tears! 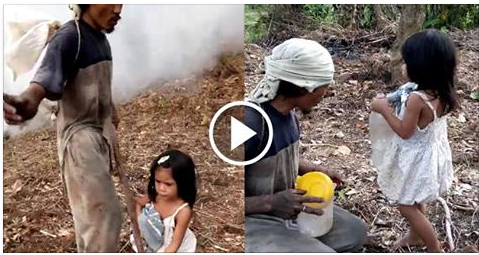 In every household, the father is expected to provide for the family. Even when burdened with a disability, many parents still work hard to provide for their family. Nelson Pepe is one of those unsung heroes.
Known as “Dodong” to locals in Sogod, Sorsogon (Philippines), he would climb coconut trees and harvest for a mere P5 (five pesos) per tree. He would climb at least 60 trees daily, to earn P300, just enough for food on the table. But how does he do this when he’s blind? His 5-year-old daughter, Jenny, guides him throughout the day.
With the help of a Philippine show called ‘Rated K’, Nelson was able to have his eyes checked up for possible improvement. Unfortunately, he had retinal detachment and retinitis pigmentosa, which made it impossible for him to regain his eyesight. The said disease was hereditary and so they tested Jenny too, who was fortunately free of it.
The said show will help him undergo livelihood training, while the local Social Welfare will give him a capital of P10,000 for a sari-sari store start-up. He will also be given Ampalaya seeds and pigs for additional income. The show also helped ‘Dodong’ and Jenny find a new, safer home in Barangay Libas.
This father is a hero, and his daughter is his sidekick!

source   www.viral4real.com
Posted by Unknown at 8:49 AM