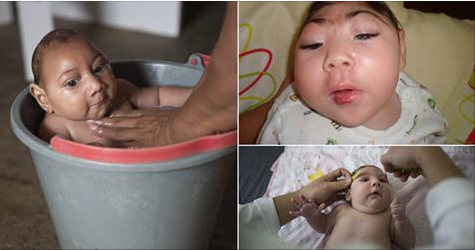 An alarming increasing number of babies being born with an oddly small head in Brazil have caught the attention of the world. As cases of the disorder continues to rise, researchers believe that they have found new evidence linking it to the Zika virus.


Known as Microcephaly, it is a neurological disorder in which infants are born with smaller craniums and brains.

Microcephaly is believed to be caused by the mosquito-borne virus called “Zika Virus” which was first discovered in Africa in 1947.

The virus was first detected in Brazil last year, thus leading Brazil’s Ministry of Health to link it to the fetal deformations and warn pregnant women to use insect repellent to avoid mosquito bites. The Zika virus then quickly spread in America which baffles scientist as to how fast it reached the country since its first known case in 2015.

49 babies were reported to have died from microcephaly, somehow only 6 cases were confirmed by health experts to have been infected with Zika virus.

But the Brazilian researchers took another step to prove that Zika virus truly causes microcephaly.

They found Zika in the placenta of a woman who had a miscarriage, which proves that the virus can reach the fetus.

Until now, researchers had only found Zika in the amniotic fluid of two pregnant women.
Jean Peron, an immunology expert at the University of Sao Paulo’s Institute of Biomedical Sciences, said, “This is a significant advance, but we still cannot scientifically state that Zika is the cause of microcephaly.”

Surprisingly, Zika virus is carried by the Aedes aegypti mosquito, which is also famous for carrying deadly viruses like dengue, yellow fever and Chikungunya.

Apart from Brazil, Colombia was the second country to register the highest number of Zika infection and this led the U.S. Centers for Disease Control and Prevention to issue a travel advisory, warning pregnant women to avoid 14 countries and territories in the Caribbean and Latin America affected by the virus.

U.S. health authorities later confirmed the birth of a baby with microcephaly in Hawaii to a mother who had been infected with the Zika virus after visiting Brazil last year.
Mosquitoes are known to spread several deadly diseases, take safety precautions as much as possible.
H/T: Daily Mail
Posted by Unknown at 11:42 PM