Home » »Unlabelled » Two puppies fell into a pit with a cobra. Then something incredible happened

Two puppies fell into a pit with a cobra. Then something incredible happened


Via: brightside.me
We often hear amazing stories about the animal world, and the more dangerous an animal is, the more incredible the story often turns out to be.
At Bright Side, we never cease to be amazed at how sensitive and responsive all kinds of creatures can be. 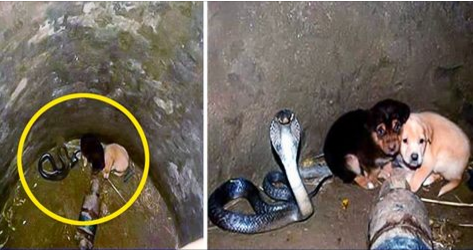 This particular story took place in the Indian state of Punjab. Two small puppies accidentally fell into a well. The pit was very deep, and they couldn’t get out on their own. Their owner soon noticed that they were missing, later hearing their mother’s loud, incessant barking.

The man looked down the well and had the fright of his life. A king cobra was sitting next to the two puppies! Amazingly however, the snake didn’t threaten them in any way. On the contrary, it seemed to be protecting them from the dangerous sides of the well, which were saturated with water. In the end, the puppies spent a total of 48 hours in the pit. When help finally arrived from the authorities, the cobra crawled to the other side of the well out of the way. The puppies were not injured at all, whilst the snake was taken to the woods and released.
This story proves once again that even the most dangerous creatures on Earth know what it means to help another being when it’s in danger.
H/t | Source: Brightside.me