Home » »Unlabelled » Photo worth a Thousand Words: Father Tearfully Provides Food for His Son amidst War in Syria

Photo worth a Thousand Words: Father Tearfully Provides Food for His Son amidst War in Syria

With millions dead, hundreds of thousands of Syrian struggle to survive.
The war in Syria has left hundreds of thousands dead, and millions dying. Unfortunately, most people do not realize the scale of the nation’s war-ridden streets. After years of war, the country is left devastated, with countless lives struggling to survive.
Many families practically eat grass and dirt just to survive. Having a piece of bread for the day is already a blessing. Parents who are able to provide for their children amidst the war know how hard it is to get a bite to eat. This father is left in tears after giving his children a mere piece of bread. 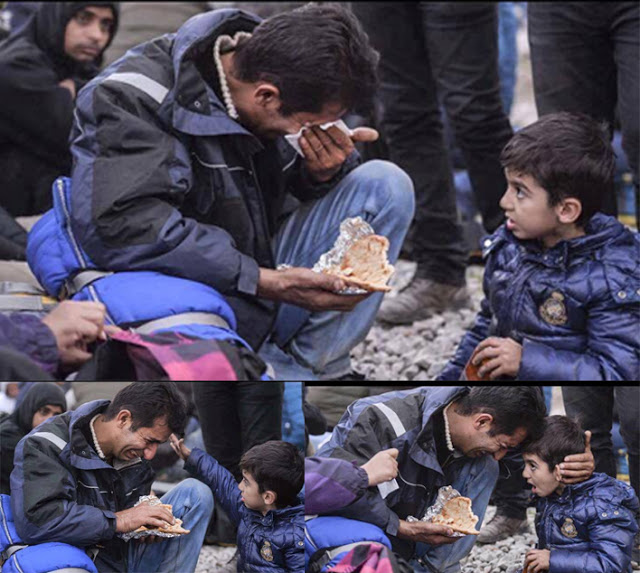 After Omran’s face went viral, this man’s devastated face is reaching millions of netizens as well. He tries hard to provide for his small children, even if it means he gets to eat nothing. This father was left in tears after providing his son with a piece of bread. His son then offers a comforting hand as he touches his father’s face as he cries.
Millions of netizens were heartbroken by the picture, which has been shared more than 50,000 shares on the Facebook page PhotoZone.
source    www.viral4real.com
Posted by Unknown at 11:09 AM