Home » »Unlabelled » Poor but Diligent in Studying: THIS Young Boy Studies Under a Street Light in the Philippines

Poor but Diligent in Studying: THIS Young Boy Studies Under a Street Light in the Philippines

A good education is the greatest gift you can give yourself or anyone else.
Every parent wants the best for their children. They want to give them an education that will take them far up in society. Unfortunately for some families, education is something that is not easy to give. Poverty has been a problem affecting the education of children. Some parents would rather buy food with the little money they get, instead of sending their children to schools they could not afford. Amazingly, this child shows us that poverty is never a hindrance if we persevere.
Education is something that can never be lost, or taken away—this is what this child must think, as he strives to study even in the sidewalks. This young boy from Calinan, Davao City in the Philippines makes ends meet as he studies by himself in the streets, using a street light to see what he was doing. 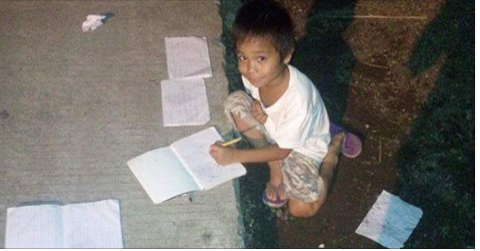 Facebook user Brian Parantar took notice of the young boy and took a photo of him. He shared the said photo on social media, which went viral overnight! The boy obviously didn’t have electricity in their home, but was diligent enough to study in the streets, despite possible dangers.
While many children and teens take their education for granted, this child struggles to at least learn a thing or two by himself. May this young boy be an example to children out there—and learn that education is something more valuable than anything in the world.
source   www.viral4real.com
Posted by Unknown at 10:18 PM