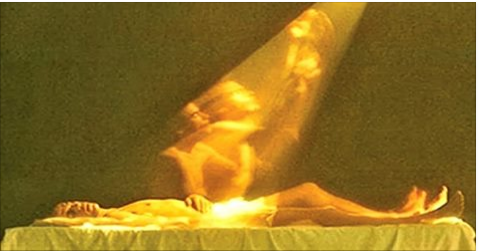 According to the statements of Dr. Konstantin G. Korotkov, a Russian scientist, the soul does exist and he also has evidence pointing out that there is something beyond death. Hence, he photographed souls leaving the body and quantified chakras.

For more than millennia, the idea of the existence of the soul has been part of the human culture. Namely, a lot of people believe in the existence of the soul, but there are also those who claim that there is no such thing. Probably, one day, there will be a certain technology which can prove the existence or non-existence of the soul. Until then, we can only look at the effects of the soul.
Trying to prove the existence of the soul is very similar to the existence of gravity. That is, although you cannot directly see gravity, you know it exists because you either feel it or see its effects. In the nineties, Dr. Korotkov, professor at The St. Petersburg Federal University of Informational Technologies, Optics, and Mechanics in Russia, created a very interesting method.
However, this isn’t new technology, but it has been created over and over again through various means. The device he invented is called GVC, based on the ancient Chinese system of energy meridians. GVC measures the bio-energy released by all living organisms through a non-invasive, painless evaluation.
The device is based on a small electrical current connected to the fingertips and takes less than a millisecond to send signals from. And, when these electric charges are pulsed through the body, the body responds with an electron cloud consisted of light photons.
The glow can be photographed with an optical CCD camera system and then translated onto a computer. Each fingertip section stands for different organs and bodily systems. The computer program then projects a body figure and puts a kind of auric cloud around it, in correspondence with each chakra.
The teachings of the ancient Ayurvedic Indian medicine claim that each part of our fingertips corresponds to different body systems and parts. Moreover, it is believed that there are 7 key energy points along the center of our being. So, Dr. Korotkov used this idea and applied it to his technology.
The colored balls stand for each chakra and how much work we need to put into it, emotionally, physically, and mentally. The farther off from its center, the more the chakra needs to be worked on.
This can be translated into physical life; hence, if your throat chakra is off, this may mean that you need to work on speaking up. Also, if your heart chakra is off, it may mean that you need to practice more understanding and compassion with the people around you.
Furthermore, Korotkov also used a type of Kirlian photography to show the precise moment when someone’s soul left their body at death. He says that there is a blue life force that can be seen when this occurs. The navel and the head are the first parts that lose their life force, whereas the groin and heart are the last.
He claims that there have been cases in which he noticed that some people’s soul, those who had violent or sudden deaths, manifested in a state of confusion as their consciousness wasn’t actually aware that they had passed away.
More than 300 doctors worldwide have used this method for stress monitoring and for cancer treatment as well. Likewise, they are becoming more and more aware that a lot of diseases arise from emotional misbalance which manifests into a physical illness. All in all, the more we understand our consciousness and how it influences our physicality, the more can we explore it medically.
Take a look at the video below to learn more:

source    www.healthtipsportal.com
Posted by Unknown at 7:04 AM