Home » »Unlabelled » This Real Life Benjamin Button Is four, But Can’t Go To School Because He Scares The Other Kids

This Real Life Benjamin Button Is four, But Can’t Go To School Because He Scares The Other Kids 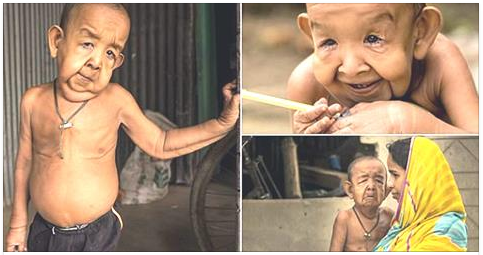 Life won’t always kind; no matter how well you act or how happy you can make others it can still find a way to completely break you if you let it.

Four-year-old Bayezid Hossain has had to learn that lesson the hard way, except at a much younger age than most people would deem acceptable, as he was born with a curious disease that causes rapid aging. He’s living the real life story of Benjamin Button, except he’s no Brad Pitt and he’s probably not going to live past the age of 15…

When he was born his parents and doctors didn’t have any idea what to think, he just didn’t look like any other baby they’d ever seen before. As it turns out their boy was going to age at eight times the normal rate of everyone else, and they didn’t really have any other choice but to bring him home.
Due to his condition the rest of the children his age are actually afraid of him, and this has caused him to become a forced recluse. He hangs out with his mother and father taking apart his toys to put them back together, drawing and doing anything he can just to pass the time.
Hossain’s parents were subject to more ridicule and torture by the people of their Bangladesh community than they deserved right alongside him, some even went so far as to visit just to use the boy as some sort of circus attraction for their amusement. Their ability as parents were even called into question on more than one occasion because of their son’s disease, something they don’t now and didn’t then have any control over.

Even still, the little boy seems to be very smart for his age and there’s no telling what all he’s actually capable of. Unfortunately his fate is too uncertain, as his special needs require a considerable amount of money to fulfill and his mother is only bringing in $75 a month, just a drop in the bucket of his growing medical bills. At this point you’ve got to ask, which fate is more cruel?